Vicky Kaushal preps to be ‘Immortal’ for his new film ‘The Immortal Ashwatthama’, shares sneak peak of ‘serious casting’ 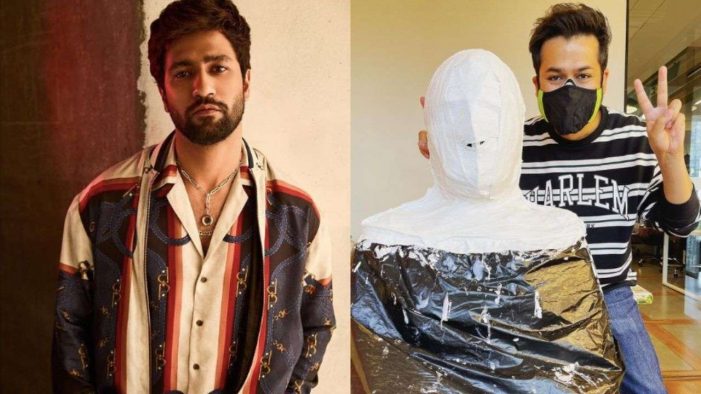 Actor Vicky Kaushal is all set to start shooting for his new film ‘The Immortal Ashwatthama’. The actor shared a photo of himself prepping to become ‘The Immortal’ and shared a glimpse of the ‘serious casting’ by director Aditya Dhar.

In the photo, Vicky’s face and upper body can be seen covered in a white cast as Aditya stands behind him with a peace sign. While sharing the photo he wrote, “When the Director’s really serious about ‘casting’ you in the Film. Prepping to be The Immortal! @adityadharfilms #TheImmortalAshwatthama.”

Vicky fans and friend were quick to react to his post with many showing excitement for the film. Ayushmann Khurrana took to the comment section and wrote, “Ashwatthama hatohate,” while Radhika Apte commented, “When this happened to me I panicked.. you seem so calm in the cast.”

Vicky Kaushal is collaborating with Aditya Dhar for the second time with ‘The Immortal Ashwatthama’. The two have earlier worked together in ‘Uri: The Surgical Strike’ which also starred Aditya’s now wife, Yami Gautam and Kirti Kulhari.

As per the epic Mahabharata, Ashwatthama was the son of guru Dronacharya, who fought for the Kauravas in the battle of Kurukshetra. The mythological character was given the boon of immortality. Vicky will essay the role of Ashwatthama in the superhero flick. As per reports, the film will have Sara Ali Khan in the lead role.

Vicky will be next seen in two biopics including Shoojit Sircar’s ‘Sardar Udham Singh’ and Meghna Gulzar’s ‘Sam Manekshaw’. He also has Karan Johar’s period drama ‘Takht in the pipeline, which has a star studded cast including Kareena Kapoor Khan, Janhvi Kapoor, Ranveer Singh and Alia Bhatt among others.

Vicky Kaushal preps to be ‘Immortal’ for his new film ‘The Immortal Ashwatthama’, shares sneak peak of ‘serious casting’ added by News89 Team on Jul 1, 2021
View all posts by News89 Team →