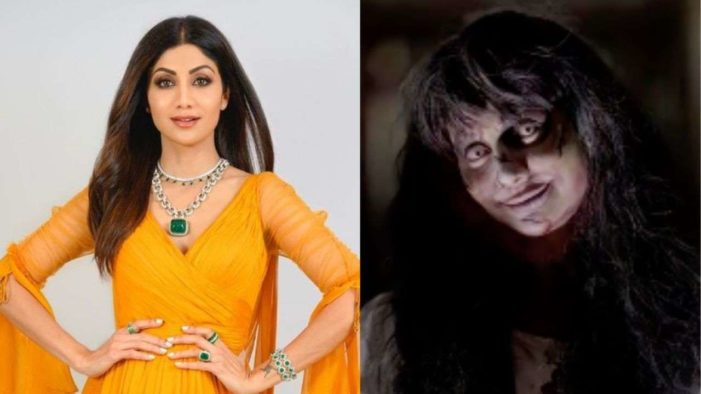 The judges and choreographers or ‘Super Dancer 4’ shared a great bond and can be seen pranking each other. Recently, Shilpa Shetty donned a scary look to scare choreographer Vaibhav and appeared to be pretty shaken by her.

In a video shared by Sony TV on their social media, Shilpa can be seen sitting on a chair as she asks the makeup artists to make her look so spooky that Vaibhav gets scared in an instant. “Too excited,” she says in the video.

After applying the special makeup, Shilpa can be seen in a grey wig, white dress, and a ghostly face with cuts on it. She herself gets startled after looking in the mirror. Shilpa says, “Toone mujhe bohot baar daraya hai Vaibhav, mai bas ek baar daraungi (You have scared me plenty of times Vaibhav, but I will only scare you once).”

In the next scene, Vaibhav can be seen calking down a narrow corridor and suddenly Shilpa jumps up on her. She laughs loudly and scares the choreographer who then screams and almost hits her. Watching Vaibhav’s reaction, Shilpa and her co-judge Anurag Basu burst into a fit of laughter.

Meanwhile, Vaibhav was touched by Shilpa’s act and appreciated her effort for the choreographers and contestants who then gave her a ‘sashtang pranam’.

Viral Bhayani also shared Shilpa’s photo in the same look with the caption, “We captured her recently at her home. Who?” To this, Shilpa’s husband, Raj Kundra replied, “I Know” with a laughing emoji. Actor Adah Sharma who essays a possessed woman in the horror movie ‘1920’ wrote, “I swear I wasn’t home. It wasn’t me!”

Shilpa Shetty’s fans also lauded the actor’s efforts. “She’s so sweet such a pure soul.. we don’t get to see judges do that,” wrote one user while another wrote, “@theshilpashetty Ma’am only you can do this.. can’t wait for this episode.”

Shilpa is also set to make her Bollywood comeback after nearly a decade with ‘Hungama 2’ which also stars Meezaan with Paresh Rawal. She will also be seen in ‘Nikamma’ with Abhimanyu Dassani and Shirley Setia.