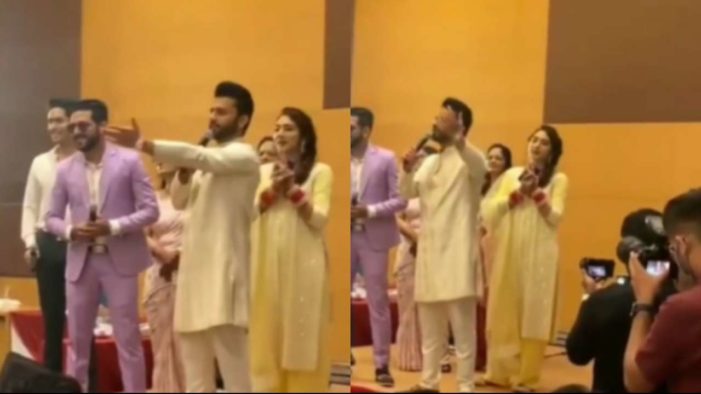 Pictures from their marriage ceremony and reception went viral in no time.

Today, Rahul Vaidya and Disha Parmar were seen spending time with their relatives and friends in the morning. Rahul Vaidya was seen on stage with his wife, Disha Parmar, and other family members during this family-time session.

While on the stage he and Disha were seen singing. Accompanying them was his mother.

However, what made everyone burst out laughing was Rahul sharing a hilarious incident from his first night with Disha.

Rahul Vaidya narrated that his mama (maternal uncle) and cousins had entered his room at 3 am in the night.

He said that Disha asked him whether there is someone else also in their room.

He added that post that in the morning at 8 am his (maternal uncle) mama came to trouble him again.

Rahul Vaidya has also posted a photo on his Instagram Stories in which he and his wife, actress Disha Parmar, posed for a selfie. While giving a closer look at their trousseau, the pair smiled for the camera. In the photo, Disha’s sindoor was also clearly evident.

For the unversed, Rahul proposed to Disha while still in the Bigg Boss house, after realising his feelings for her during his time on the show. Disha said yes and appeared on the show in February to celebrate Valentine’s Day with him