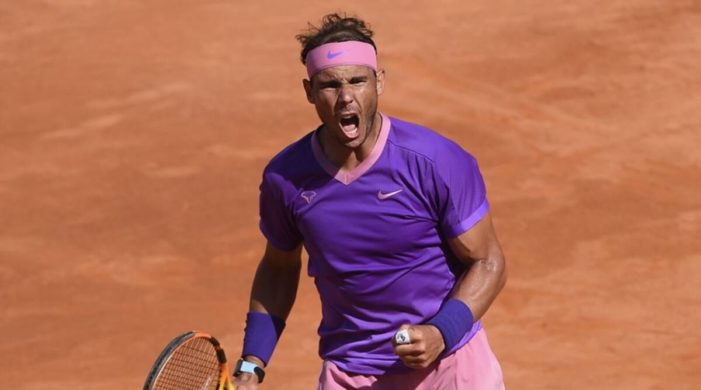 Rafa Nadal has already hoisted the French Open trophy a jaw-dropping 13 times and with the tantalising prospect of increasing his Grand Slam haul to 21 – thus becoming the most successful player in men’s tennis – it is difficult to see anyone stopping him in Paris.

The Mallorcan will turn 35 during the tournament but shows little sign of slowing down. By triumphing in Barcelona and Rome for a 12th and 10th time respectively, he won two of the four tournaments he had entered in the run-up to the claycourt major.

Andrey Rublev and Alexander Zverev may have comfortably beaten Nadal in Monte Carlo and Madrid respectively but as anyone who has encountered Nadal at Roland Garros knows, beating the Spaniard in a best-of-five-set claycourt match is the ultimate challenge in tennis.

Since his debut Paris appearance in 2005, it has happened only twice.

Those searching for weaknesses in Nadal’s armour could take heart from the Spaniard’s losses to Rublev and Zverev as well as the fact he recently dropped sets on clay against Denis Shapovalov and Kei Nishikori. Nadal being outclassed 6-1 on red dirt is also a rare sight, as was the case in the second set of the Rome final against Novak Djokovic.

But he has a habit of truly coming into his own at Roland Garros, as his 100-2 win-loss record testifies.

He shrugged off injury problems on his way to victory in 2019 and also blasted his way to the 2020 title without dropping a set in the rescheduled tournament last October despite hardly playing any matches in the run-up due to coronavirus concerns.

While other players complained of the unfamiliar autumn conditions in the French capital, Nadal stormed his way to the final before thrashing Djokovic 6-0 6-2 7-5 to tie Roger Federer’s men’s record of 20 Grand Slam titles.

Nadal said he had a “complete” tournament in Rome and was in optimal shape for the looming trip to Paris, which he called “the most important place in my career”.

“I’ll be working on things that I need to improve and I also need to relax on a mental level,” he said.

READ | Osaka to avoid pressers due to mental health concerns

“Winning always gives you a boost and it’s evidently better to arrive at Roland Garros with this trophy in my arms.”

Two-time French Open finalist Alex Corretja believes the only thing standing in Nadal’s way to yet another title could be the physical strain of energy-sapping matches in the latter rounds.

“It’s getting closer to be more and more difficult for him but winning Barcelona and especially Rome was crucial to him, to feel like, OK, I am still the best on clay ever,” Corretja, who will commentate on the tournament for Eurosport, told Reuters.

“Imagine Rafa faces (Stefanos) Tsitsipas in quarter-finals, Novak in the semis and (Dominic) Thiem in the final, there’s a big doubt about how fresh he would be. It could affect the result.

“But Rafa is the only one who knows how to deal mentally with these tough draws, especially on clay, how to recover, play important moments. To play him over five sets on clay is like a nightmare because he brings such a high energy from the beginning.”