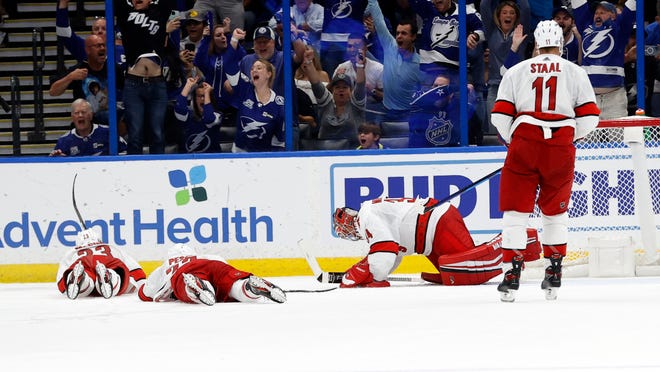 UNIONDALE, N.Y. – This barn hasn’t seen its last hockey. That much is a guarantee for the Nassau Coliseum, where the New York Islanders defeated the Boston Bruins 4-1 on Saturday in Game 4 of their second-round series.

By evening the series 2-2, the Islanders ensured that Game 6 will be played here Wednesday, regardless of the outcome of Game 5 Monday night in Boston. Had the Islanders fallen Saturday, there was a chance that this building would have seen its last professional hockey. The Islanders will move to a brand-new arena in Elmont, New York, starting next season.

Islanders star Mathew Barzal played hero in the victory, scoring the game-winner off a deflection with less than seven minutes remaining.

WILD PERIOD:Lightning and Hurricanes combine for eight goals in second

After being named first star of the game, Barzal skated the customary salute and shouted to the Islanders faithful: “Let’s go. Our house.”

“We go down 3-1 to these guys heading back to TD Garden,” Barzal said, “that’s a death sentence,”

A period earlier, he had been on the receiving end of a cheap shot from Bruins forward David Krejci during a chippy game that featured several skirmishes and fisticuffs.

“As much as you want to put that on us, I think they were looking for some momentum, too,” Islanders coach Barry Trotz said.

Barzal had cross-checked Krejci several times before the Bruins player reacted at 11:16 of the second period by using his stick to, seemingly on purpose, hit Barzal in the groin.

The referees originally whistled Krejci for a major but switched it to a two-minute slashing minor after a review. Barzal was all right after the game, but expressed some surprise that a major wasn’t upheld.

“I haven’t seen the clip, but I felt it was a little vicious,” he said. “It’s the refs’ call, a judgment call for them, yeah, I thought it was a tad vicious.”

Washington Capitals star Alex Ovechkin received a fine of $5,000 for a similar play as Krejci’s earlier this season. That amount is the maximum fine under the collective bargaining agreement. There is a chance Krejci could face the same financial sanction after the NHL Department of Player Safety reviews the play.

Krejci had started the game’s scoring with a second-period, power-play goal. The Islanders answered quickly, with Barzal finding Kyle Palmieri in front of the net for the equalizer.

Empty-net goals from Casey Cizikas and Jean-Gabriel Pageau cemented the victory for the Islanders, who got 28 saves from goalie Semyon Varlamov. Boston’s Tuukka Rask finished with 30 saves.

This year’s NHL playoffs have not been without physicality. On Thursday, the NHL suspended Winnipeg Jets forward Mark Scheifele four games for a hit on the Montreal Canadiens’ Jake Evans that resulted in Evans needing to be stretchered off the ice.

In the Vegas-Colorado series, Golden Knights forward Ryan Reeves was suspended for two games for his actions against Avalanche defenseman Ryan Graves during a scrum.

And despite being on the receiving end of a different borderline play Saturday, Barzal found a way to make his star shine in the brightest moment.