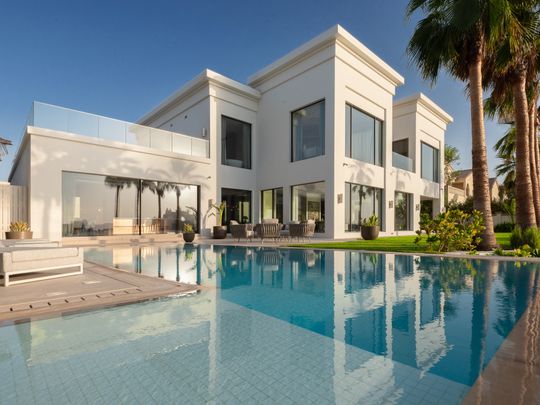 Dubai: A German expatriate living in Dubai has sold a refurbished signature villa for a whopping Dh70.2 million — one of the highest recorded sale up until now.

Holger Albers, a shareholder of different businesses, including AIM Hedge, an investment firm based in Liechtenstein, as well as ACORE Group and Yonhampton Group, both real estate development companies, active globally, concluded the deal five days ago with a mystery buyer. The redesigned Palm Jumeirah signature villa was sold for Dh69.2 million along with his private art collection valued at Dh1 million, totalling Dh70.2 million.

The villa is a five-bedroom property with a 10,000 square feet built-up area. It is spread across a plot size of 14,500 sqft. The property comes with a separate study, a media room, a large open plan living area, a separate maid’s room among others.

“The asking rent on the property is close to Dh3.67 million per annum. Service charge is set to be around Dh25,000 annually,” Albers told Gulf News in an interview.

Albers has been calling Dubai his home for over a decade and has created multiple beachfront villas in the UAE over the years. “I have had the good fortune of owning some beautiful homes around the world”, said Albers. “But Dubai is special to me. I love Dubai — for me it’s the world in one city,” he said. “The villa has been sold to a foreign investor who requests anonymity.”

In 2010, Albers made another record sale of a signature villa, again on Palm Jumeirah for Dh50 million.

Chris Boswell, a real estate agent with over $1.15 billion in global sales helped Albers conclude the deal of the property which was co-listed by Barnaby Crompton. “Every once in a while, a property comes to the market that is really unlike anything seen before. This is one of them. Palm Jumeirah is iconic and attracts buyers from UAE and the world.”

About the villa interior

Albers said he hired Tom Brooks, founder of Cherwell Dubai, to do the fitout for the villa. “The villa design sees a blend of British heritage with innovative modern design elements.

“Upon arrival, the villa’s grand elevation and facade combines traditional and modern elements for a timeless aesthetic. The entry path is decorated with 20 feet palm trees. The entry vestibule comes with two double oak doors bordered with copper plated cladding. The entrance has a security system with CCTV home automation.”

Demand for high-end properties coming from millennials in Dubai

Boswell said: “The demand we are seeing for high-end waterfront villa properties is completely unprecedented. Demand is overwhelming. We receive a dozen enquiries a day sometimes from clients all over the world especially the Europe, USA and Asia. Increasingly we are seeing the demand coming from millennials. Buyers are getting younger from what we were seeing before.”