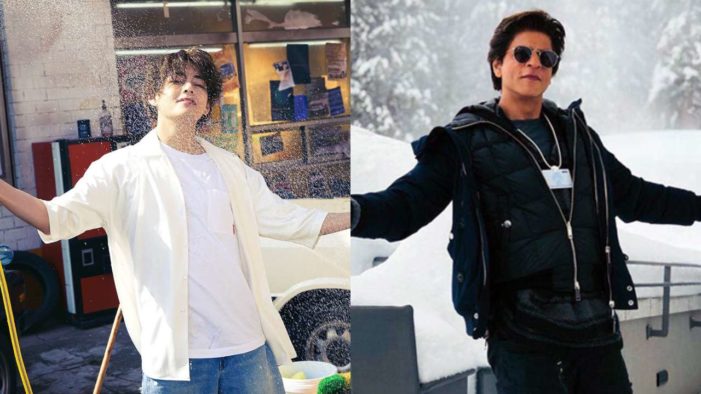 K-pop band BTS recently released the third version of concept pictures of their new single ‘Butter’ on Instagram. The photos have taken the internet by storm and fans can’t seem to get enough of them.

All seven members of the band – RM, Jin, Suga, J-Hope, Jimin, V and Jungkook can be seen dressed as car washers with a gas station serving as the backdrop. Though all the pictures are great and every member is looking dapper flaunting their new look and new hair colours, one member has caught the eyes of fans for a very different reason.

V aka Kim Taeyhung, is seen posing with both his hands stretched to his sides while holding a water hose in his hands. It is reminding the fans of Shah Rukh Khan’s famous signature pose where he too stretches his arms wide open for his leading ladies in his films. Fans aka ‘ARMY’ cannot stop comparing the two and are calling him the Korean version of Shah Rukh.

In one of the photos, V(BTS) was seen posing with both his hands stretched to his sides. He held a hose that splashed water all around him. V wore an off-white shirt over a white T-shirt and blue denims. However, V reminded fans of actor Shah Rukh Khan’s signature pose.@BTS_twt pic.twitter.com/3l0mexua4I

Last year on V’s birthday, a fan managed a customized advertisement of the singer on the iconic Burj Khalifa. It was right after Shah Rukh Khan received a similar gift on his birthday in November.

BTS V become the first korean artist and the second artist in the world (after Shah Rukh Khan) , whose pic was on world’s tallest building “Bruj Khalifa”. Once , it was a editing but now dreams are coming true . Some Chinese Army spend $1M for this #btsv #HAPPYVDAY #viral pic.twitter.com/LGcEDPOM9w

For the unversed, BTS aka Bangtan Sonyeodan is a boyband that belongs to South Korea and has become a global name. Recognized as one of the leading K-pop artists on the international scale, the boys are ruling everyone’s hearts. Most of them belong to a humble background and worked hard to reach where they are today. BTS released its summer single ‘Butter’ this year in June which has seemed to break all records on all streaming platforms. It is one of the most viewed songs on Youtube.