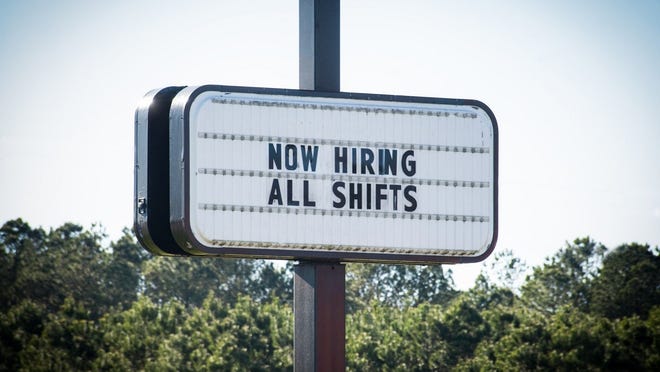 The unemployment rate, which is calculated from a different survey of households, ticked up from 5.8% to 5.9%, the Labor Department said Friday.

Economists had estimated that 720,000 jobs were added last month, according to a Bloomberg survey.

Leisure and hospitality, the industry hit hardest by the pandemic, again led the gains, adding 343,000 jobs, including 194,000 at restaurants and bars, as more states ended capacity limits.

Local, state and private education added 269,000 jobs but those advances represented a quirk of Labor’s seasonal adjustments. School employees typically come off payrolls in June and July. But since fewer education workers are employed because of the pandemic, fewer dropped off and that translated into a big gain after seasonal adjustments.

Professional and business services added 72,000 jobs. Retail added 67,000 as more stores reopened. And manufacturing, which has been beleaguered by supply-chain bottlenecks, added 15,000.

Several forces are coalescing to juice the economy and labor market, leading analysts to forecast record job gains of 7 million to 8 million jobs this year.

COVID cases this week fell to a seven-day average of about 12,000, the lowest since March 2020. Forty-seven percent of the U.S. population has been fully vaccinated. And most states have lifted all pandemic-related restrictions.

Also, Congress has passed about $3.2 trillion in government stimulus spending since late last year, including more checks for households.

Consumer demand, in turn, is surging after more than a year of state lockdowns and self-imposed restraint. Restaurant seatings on OpenTable, an online reservation service, were just 10% below 2019 levels one week in mid-June, compared to a 17% deficit in a comparable May week,and the strongest showing since the early days of the pandemic, according to Goldman Sachs.

Even live theater, perhaps the sector that absorbed the biggest blow from the pandemic, is coming back and hiring again.

In March 2020, Chad Brown, 40, was laid off from his job booking musicians, comedians and other acts at a venue in Denver while his wife, Kaytlain, could no longer work as a massage therapist.

Brown got a part-time job at a company that prepares meal kits while Kaytlain received unemployment benefits, but their income wasn’t enough to make ends meet in Denver. So a year ago, the couple and their 8-month-old son moved in with Kaytlain’s parents in Montana. Chad bartended once a week while Kaytlain worked as a restaurant server.

In March, Chad noticed a few theater-related job postings and began applying for positions across the country. In mid-May, he landed a position as manager of a restaurant, bar and private events at a theater preparing to stage plays and musicals in Phoenix. He started this week. Such productions better fulfil Chad’s career goals than his previous theater job, and he hopes to rise to artistic director in Arizona or another theater.

“It was very exciting,” Chad says of the job offer. But he adds, “I still think it’s going to take a long time” for patrons to return to the theater.

Earlier this spring, job gains were strong by historical standards but fell well short of the 1 million advances per month that many forecasters were anticipating.

The problem: Businesses are still struggling to find enough workers, surveys show, with many economists partly blaming a federal bonus in unemployment benefits that may discourage some people from returning to work or taking new jobs. Others are taking care of kids who are still distance learning or are afraid of contracting the coronavirus.

But Goldman Sachs suspects some of these stumbling blocks are diminishing.

About half the states have said they’ll cut off the unemployment perk before a September deadline, and many started doing so in June. Goldman noted that ongoing jobless claims dropped more rapidly in those states last month. Yet Homebase, which provides employee scheduling software, said employment actually grew 1.7% more slowly in those states.

See who has cut the extra $300 a week:What states are ending federal unemployment benefits early?

Meanwhile, many high school and college students joined the labor force in June, partly easing the worker crunch in low-wage industries such as restaurants and retail, Goldman said. And employers have been boosting wages to attract reluctant job candidates, Oxford Economics says.

The strong June employment gains “despite persistent hiring strains is likely the start of a series of stellar reports that will underpin the strongest U.S. economic performance since 1951,” says economist Lydia Boussour of Oxford Economics. Oxford expects 8 million jobs to be added this year, highlighted by a couple of months with advances of at least 1 million.

There are still obstacles keeping many Americans on the sidelines. The share of adults working or looking for jobs — which comprises the labor force — held steady at a historically low 61.6% last month, a sign of “ongoing strains in the labor market,” says Rubeela Farooqi, chief U.S. economist of High Frequency Economics.

The number of Americans on temporary layoff was largely unchanged at 1.8 million. The figure is down from 18 million in the early days of the pandemic now that many restaurants and other business have brought back furloughed workers. About 19% of unemployed workers said they were on temporary layoff, down slightly from the previous month. But there’s less room for gains through rehiring than there was early in the crisis.

The ranks of Americans permanently laid off was also roughly stable at 4 million.

The number of people unemployed six months or longer rose by 233,000 after falling 431,000 the prior month, underscoring that monthly changes in Labor’s household survey are volatile. Still, long-term unemployment has fallen by a net of nearly 200,000 the past two months, suggesting that employers struggling to find workers are turning to the long-term unemployed, a label that seems to carry less of a stigma during the health crisis. At the same time, the ranks of the chronically jobless are still nearly 3 million above the pre-pandemic level.

That group made up 42.1% of all those unemployed last month. “This may need a targeted effort to engage employers about the value of workers who have a 26+ week episode of unemployment,” says Jane Oates, president of WorkingNation, a nonprofit that raises awareness about the challenges facing U.S. workers. She previously headed the Labor Department’s employment and training division under President Obama.

Other employment measures improved last month. The number of employees working and the hours they put in both grew by about 4% to the highest levels since the start of the pandemic, according to Homebase.

Hurry up and wait:A new study reveals which US city has the worst traffic, and it’s no longer Los Angeles