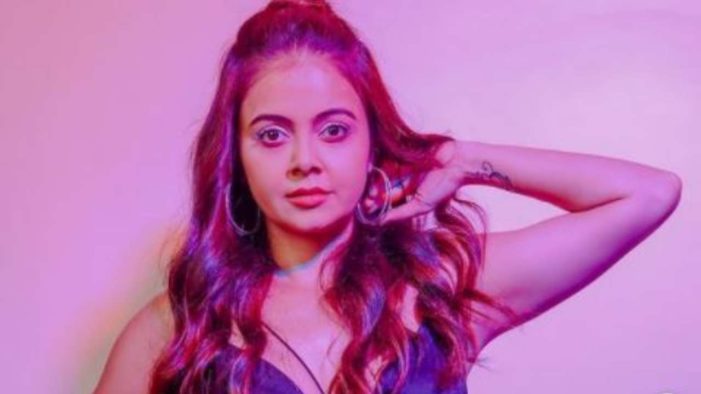 TV star Devoleena Bhattacharjee, who was last seen in the controversial reality show ‘Bigg Boss 14’ when she replaced actor Eijaz Khan mid-show, recently made headlines after a belly dancing video that she shared on her Instagram handle, went viral on the internet.

Soon after, Devoleena Bhattacharjee lit up social media with her sizzling portraits dressed in a denim shirt and sporting wet hair beach waves. The diva looked gorgeous with her on-point makeup that killer stare at the camera lens.

And now, after making her fans go weak in the knees with her dancing skills and stunning portraits, Devoleena is breaking the internet with another set of photos in which she can be seen in a unique avatar.

The 35-year old actor, who is well known for her role as Gopi Bahu in the hit serial ‘Saath Nibhana Saathiya’, is seen clad in a well-fitted, black strappy bralette top teamed with a leather skirt featuring frills and over-the-knee boots.

Devoleena completed her look with her hair tied up in a half knot with the open tresses styled in soft curls. She accessories her look with big hoops earrings and a few rings on her fingers. The TV stars posed against a solid coloured background but made the portrait interesting by adding dramatic lighting effects.

Take a look at the photo here:

Earlier, Devoleena had shared a belly dancing video that took the internet by storm. Take a look at the video here:

On the work front, Devoleena was seen in the 2021 web series ‘Lunch Stories’ which was streamed on Disney+Hotstar.