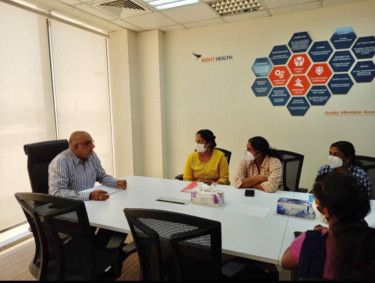 Dubai: Around 230 Indian nurses from Kerala, who were stranded in the UAE after being duped by recruitment agents, have been hired by major private health-care groups here.

As reported by Gulf News last month, several nurses from the south Indian state were hoodwinked by recruitment agents who offered them jobs at COVID-19 vaccination and testing centres in the UAE. These nurses were brought into the UAE on visit visas. They were charged exorbitant commissions ranging from Rs200,000 to Rs350,000.

Offering a lifeline to the frontline warriors struggling during the COVID-19 pandemic, prominent health-care groups here had come forward with job offers.

“Out of many prospective nurses, those who approached us after Gulf News broke the story of fraud and plight, 24 of them have been interviewed and are at various stages of selection, hiring and placement,” an official spokesman from NMC Healthcare said in a statement to Gulf News on Wednesday. “To further support their cause of getting employed quickly, we are hosting a series of walk-in nursing events in Abu Dhabi and Sharjah on 11th June,” the NMC statement added.

Fara Siddiqi, group chief HR officer, Aster DM Healthcare, said the group had conducted walk-in interviews for nurses and have selected and offered jobs to more than 100 nurses who were impacted.

The group had urged stranded nurses to refer to the Gulf News report in the subject line while sending their CVs.

Dr Sanjay M. Paithankar, managing director of Right Health, said: “We have interviewed almost 40 nurses and 14 have been hired. We are in the process of hiring 12 more.” Dr Paithankar said he was impressed by the qualifications and experience of many nurses. “They are highly experienced women who were working in top hospitals in India,” he added. He said it was for the first time that unlicensed nurses were being allowed to start working on a temporary permit. “They have been provided accommodation and transportation. We will help them to write the exams for licensing in three months.”

Abu Dhabi-headquartered VPS Healthcare had last week announced that they had recruited 90 nurses. They include 81 female nurses and nine male nurses.

Meanwhile, two stranded female nurses, who had blown the lid off the recruitment scam by filing a petition with Kerala Chief Minister Pinarayi Vijayan, have also landed jobs in the UAE. “We joined yesterday (June 1),” said Reena Rajan, one of the petitioners. Rajan and her cousin’s wife Susan Saji, also a nurse, had moved out of the accommodation arranged by the recruitment agents after they realised that they had been cheated. They had paid Rs230,000 each to the recruitment firm ‘Take Off’ in Kochi.

Requesting not to disclose where they had been appointed due to safety concerns, the duo thanked the management that offered them jobs when they were in dire straits. They thanked the Kerala chief minister and Kerala Police also for their quick action in the case. Two of the accused, against whom they had complained, have been arrested and remanded in judicial custody in Kerala.

Still scared of the racket

They duo said they were overjoyed by the help extended to them. However, they are still living in fear. “But other members of the racket are still here. They are still searching for us. It is a big racket and we are scared,” said Rajan. The duo said they were grateful that their petition had led to the arrest of the main accused and their pleas through the media helped them and several other conned nurses find employment.

Saji said three other nurses who had flown along with them to the UAE had also been hired by another health-care group. “We are thankful to all the health-care groups that offered us jobs and supported the nurses who were in trouble.” They said they had no contact with the others who were housed along with them in an apartment in Al Rigga, Dubai. “They removed us from the WhatsApp group after they came to know we had complained against the recruitment agents. They were scared.”

According to Dr Paithankar, most of the nurses who appeared for interviews with his group were still under the control of the agents. “They direct them and the nurses are not able to take their own decisions,” he pointed out. “Most of their passports and certificates are still with the agents. They are selectively releasing them,” he said.

In a statement to Gulf News on Wednesday, the Indian Consulate in Dubai said: “We are grateful to Dubai authorities and the health-care groups for extending help to the stranded nurses from India and facilitating their recruitment. This has come at an opportune time when the service of nurses is in huge demand, especially in the wake of the COVID-19 pandemic,” the mission added.

Siddiqi said Aster DM Healthcare had more than 300 vacancies for nurses due to the group’s expansion plans in the UAE. “We have our newest hospital opening in Sharjah. Also, there are existing job openings at our hospitals and clinics across Aster and Medcare establishments. We are continuing to hire talented nurses and will encourage those that are still searching for an opportunity to contact us,” she added.