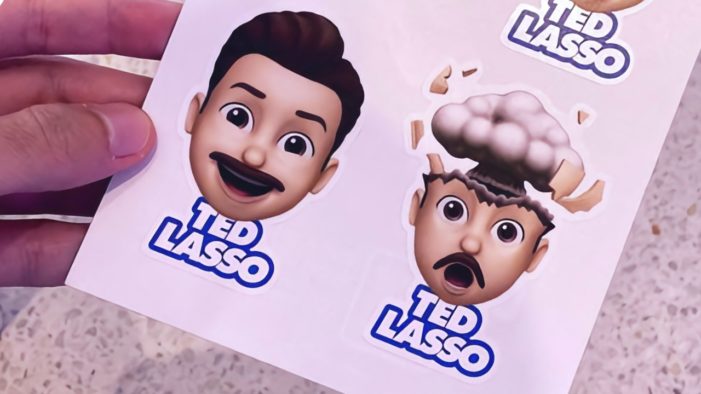 Some Apple Stores are giving customers “Ted Lasso” stickers featuring Memoji of the titular character ahead of the Season 2 premiere.

“Ted Lasso” debuted as a sleeper hit for Apple TV+ and Apple has leaned heavily into marketing the second season. Apple hasn’t done much physical marketing for its media properties, but that seems to be changing with a recent push into merchandise.

As first reported by 9to5Mac, some customers are receiving “Ted Lasso” sticker packs when visiting a retail store. It is unknown if every Apple Store is handing out the stickers, so making a special trip just for the stickers isn’t advised.

The sticker pack contains four stickers featuring Memoji designed after Ted Lasso. The back of the sheet has an ad for the show and a QR code that launches the Apple TV app.

Once the show’s popularity was clear, Apple executives like Tim Cook have been heard citing it as their favorite show on the platform. Cook even attended the season 2 premiere of the show in Los Angeles.

Watch season 2 of “Ted Lasso” on Apple TV+ starting July 21. Customers can subscribe for $4.99 per month or via any tier of the Apple One subscription bundle.

Keep up with everything Apple in the weekly AppleInsider Podcast — and get a fast news update from AppleInsider Daily. Just say, “Hey, Siri,” to your HomePod mini and ask for these podcasts, and our latest HomeKit Insider episode too.

If you want an ad-free main AppleInsider Podcast experience, you can support the AppleInsider podcast by subscribing for $5 per month through Apple’s Podcasts app, or via Patreon if you prefer any other podcast player.