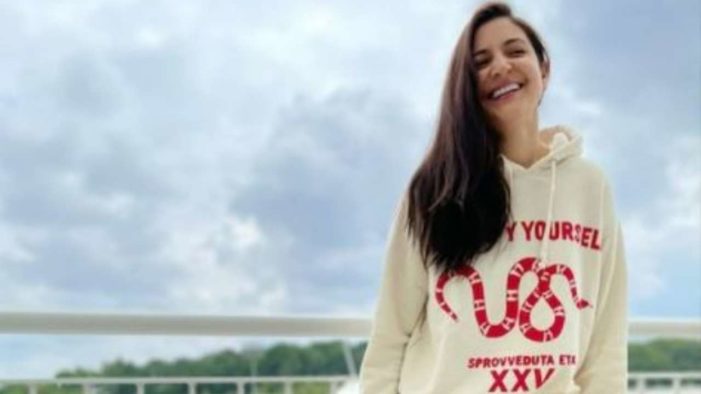 Bollywood actress Anushka Sharma who is accompanying husband and Indian cricket team captain Virat Kohli in England for his World Test Championship tour, on Saturday took to her Instagram handle to share a glimpse of her ‘quarantine at the stadium’ life. Alongside a solo photo posing in the backdrop of a stadium, Anushka who was all smiles for the camera, joked that ‘don’t bring home work’ will not be applicable for husband Virat Kohli for some time. She followed up the caption with #’quarantineatthestadium’.

With this social media post, Anushka revealed the location of their stay. Virushka is currently in Southampton and looks like they are couped up at a plush hotel that is inside the cricket stadium. Given the proximity of the stadium from the hotel as seen in the picture, Anushka will definitely be cheering the loudest for Virat and the men in blue as they look to raise the Test Championship trophy.

“Don’t bring work home isn’t going to be applicable for Virat for some time. #QuarantineAtTheStadium,” Anushka wrote alongside the photo in which she is seen sporting a casual look. Dressed in comfy grey joggers and an off-white sweatshirt, Anushka Sharma looked gorgeous in the picture.

Meanwhile, photos of Anushka Sharma and Virat Kohli’s daughter Vamika have been going viral in which fans get a glimpse of the baby girl’s face.

Virat Kohli and Anushka Sharma who was snapped carrying little Vamika in a baby carrier were snapped as they got from a bus in which they were accompanied by the entire Indian cricket team and their families a couple of days ago.

As expected, Anushka Sharma’s photos carrying little munchkin Vamika went viral on the internet as she tried to cover her face and prevent the paps from taking any pictures revealing her daughter’s face.

However, one photo of the actress getting down from the bus while wrapping her arms around Vamika has been breaking the internet. In the said photo, Vamika’s face is slightly visible as she soundly sleeps in the carrier. This is the first photo where fans could get even the slightest glimpse of what Virat Kohli and Anushka Sharma’s daughter Vamika looks like.

This shall be Vamika’s first overseas outing with her parents and Virat’s first international tour with his daughter.