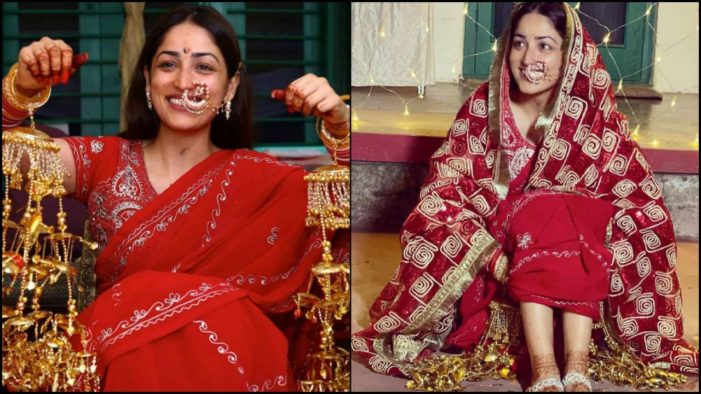 After surprising everyone by announcing her wedding with filmmaker Aditya Dhar, Yami Gautam has been treating fans with moments from pre-wedding rituals. On Saturday, the actor shared photos from the Mehendi ceremony and now she posted her beautiful photos from Haldi and Kaleera ceremony. Yami opted for bright yellow and red traditional outfits for the rituals and looked drop-dead gorgeous with a bridal glow.

In the first photo, Yami is seen in a yellow salwar suit with a red dupatta and she completed her look with shell jewellery. She is seen getting haldi applied on her face by her sister Surilie Gautam.

Whereas in the second photo, Yami wore a bright red saree with a huge nose ring and is showing off her kaleere on both hands.

While in the final photo, she is seen in a no make-up look wearing the red attire and smiling candidly as she gets clicked.

Meanwhile, on the work front, Yami will next be seen in ‘Bhoot Police’ directed by Pavan Kirpalani. The horror-comedy produced by Ramesh Taurani and Akshai Puri also stars Saif Ali Khan, Arjun Kapoor and Jacqueline Fernandez in the lead roles. ‘Bhoot Police’ is likely to get an OTT release this year.

Yami also has a social-comedy film titled ‘Dasvi’ which also stars Abhishek Bachchan and Nimrat Kaur in the lead roles. The actor wrapped the shoot of the film a few weeks back. ‘Dasvi’ is directed by Tushar Jalota and co-produced by Dinesh Vijan under his home banner Maddock Films.