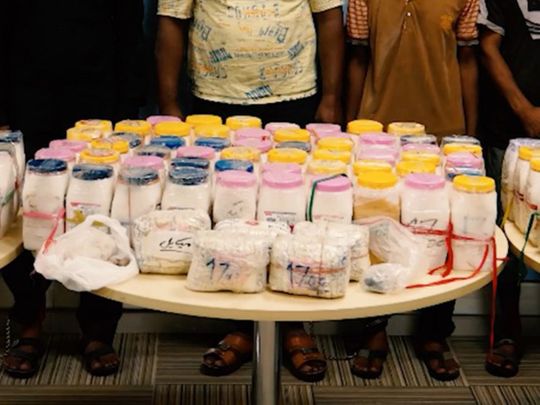 Sharjah: The Anti-Narcotics Department of Sharjah Police seized more than 216kg of narcotics and psychotropic substances, including crystal anaesthetics, heroin and opium.

The operation called ‘Poisoned Rope’ intercepted a gang of six suspected drug peddlers, all of whom were expatriates, leading to their arrest. The Anti-Narcotics Department was tipped off about a large quantity of illicit substances being smuggled into the UAE through its territorial waters, within the jurisdiction of Sharjah, and the consignment finally landed at Khalid Port, said Lieutenant Colonel Majid Al Asam, Director of the Anti-Narcotics Department of Sharjah Police.

Lt Col Al Asam said that following the tip-off, a trap was set by the authorities to arrest the suspects once the vessel carrying the narcotic substances arrived at Khalid Port. Police found the shipment contained more than 215kg of narcotic substances.

Six suspects were arrested by the police with the help of UAE Coastguard. The smugglers made cavities in the columns and corners of the vessel to hide the narcotics.

During the search operation, police found more than 182 cans of various sizes, along with bags and rolls, containing 209kg of crystals, 6.7kg of heroin and opium with a market value of about Dh35 million.

The suspects confessed to their crime and admitted to bringing narcotics into the country for the purpose of storing and promoting them. “The suspects were referred to the Anti-Narcotics Department at Sharjah Police General Headquarters for further investigation,” Lt Col Al Asam said.

Lt Col Al Asam praised the coordination between all sections of the Anti-Narcotics Department and the effective role played by the Marine Facilities and Coastal Protection Authority.

“We have aborted many plans of drug dealers to promote drugs in the UAE and many drug dealers who targeted young boys and girls have been arrested,” he said, adding that the Anti-Narcotics Departments in the UAE were “working hard to ensure the safety of the society”. He urged the public to call the toll-free number 8004654 or contact on the e-mail address, dea@shjpolice.gov.ae, to report any suspicious activity.

Addressing a Press conference here today, Major-General Saif Al Ziri Al Shamsi, Commander-in-Chief of Sharjah Police, said that the force’s prompt action had led to two major drug hauls this year. Earlier in May, seven people were arrested and 115kg drugs were confiscated from them, following a tip-off.