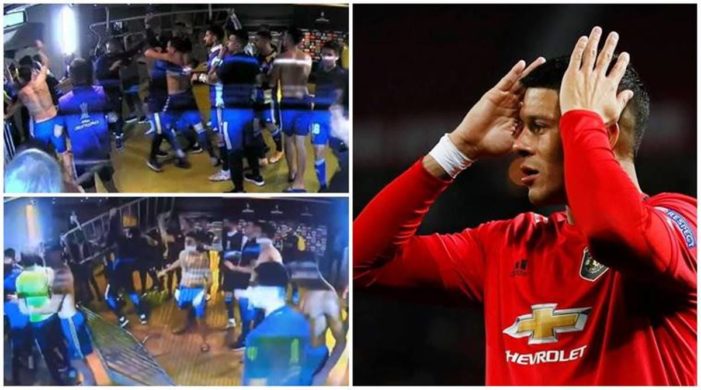 Players of Argentina’s Boca Juniors spent the night in a bus outside a police station in the Brazilian city of Belo Horizonte after brawling with security following their Copa Libertadores penalty shootout loss to local Atletico Mineiro on Tuesday.

The fight erupted as players from Boca Juniors returned to the locker room. Video footage showed members of the team throwing punches and objects at security personnel. The team apparently was infuriated by a goal that had been disallowed by a video review offside call.

The Brazilian club said on Twitter that Boca players had also tried to break into their locker room and that they destroyed water coolers and railings.

The Argentinian delegation had been expected to fly back to Argentina that same night, online news site G1 reported, but the team bus was taken to the police station instead.

The delegation remained outside the police station on Wednesday morning, but Argentina’s ambassador in Brazil, Daniel Scioli, said on his official Facebook page that the entire team would be returning to Argentina in the afternoon.

Atletico Mineiro said its chairman, Sérgio Coelho, negotiated with security forces so that Boca players would testify to police about the incident without the risk of getting arrested.

Former Man Utd defender Marcos Rojo grabbing a fire extinguisher at the during the fight between Atletico Mineiro and Boca Juniors players.#mufc pic.twitter.com/aj60e70d2S

Santiago Mayor, spokesman for the military police in Belo Horizonte, told the Argentine TyC Sports channel that three Boca Juniors players had been identified as attacking security personnel, though he did not identify them.

Both matches of the round-of-16 clash ended goalless, but Atletico Mineiro won 3-1 on penalties Tuesday night to advance. Boca Juniors players and executives were furious that a goal was annulled after a video review.

Atletico Mineiro will face one of two Argentinian clubs in the next stage. River Plate and Argentinos Juniors drew 0-0 last week.