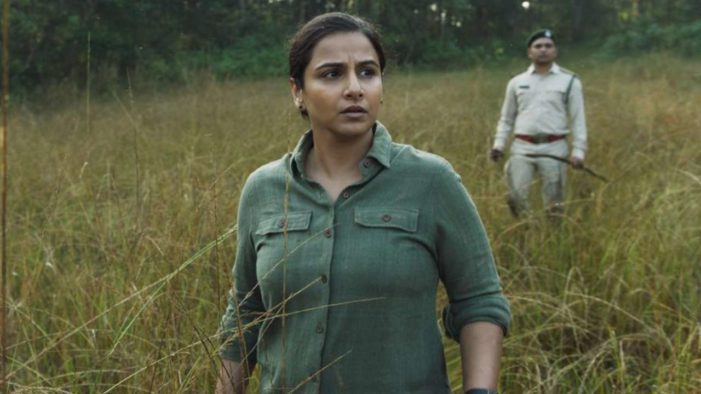 After enthralling the audience with her last outing ‘Shakuntala Devi’ and garnering massive praise for it, actor Vidya Balan is all set to win over the viewers once again with ‘Sherni’.

Directed by ‘Newton’ fame Amit Masurkar, ‘Sherni’ is a path-breaking story entailing the journey of a female forest officer navigating through her marriage with her rather unusual job.  The film which is set to release on Amazon Prime Video on June 18, has Vidya’s character Vidya Vincent taking on the patriarchal mindset in her own way while ensuring that she gets the job that she set out for, done.

To talk more about Vidya Vincent, shooting amid the pandemic, choosing roles that look to break out of the mould, feminism and more, we had actor Vidya Balan in an exclusive tête-à-tête.

Here are a few excerpts:

Q. Breaking out of the mould seems like a key ingredient in the roles that you play. Is one of the reasons why you said yes Sherni?

A. I’ve never thought of it like that. But I think I get bored with the routine, the mundane. I get bored with repetition. Maybe that’s why I’m constantly looking to do something new. And therefore I end up choosing the roles that I do. Now that you’re saying it, maybe because I don’t like to be imprisoned in a mould, I’m trying to break it always.

Q. Your last outing ‘Shakuntala Devi’ was supposed to be a theatrical release but later got released on OTT. With ‘Sherni’, it’s a  similar scenario. What do you have to say about your films being released digitally because of the pandemic?

A. The pandemic is an unfortunate world event. All of us want to wish away. It’s obviously impacted various businesses, including our theatres. So, in this given scenario, thank God for the OTT platforms where we’re able to release-ready content. I do I have to say Amazon Prime is probably the best possible platform for Sherni because it is a universal film and this platform takes it to 240 countries on the same day, in this case on the 18th of June.

Q. How difficult was it for you to work under strict protocols? Did working in a bio-bubble act like an added pressure to quickly wrap the shoot or was it liberating to be out in the forest?

A. In one way it was difficult but not so much for me, as much as for the rest of the unit who was in masks and PPE kits. On some very hot days, it was tough. But besides that, I think we were saved because we were in the jungle. We were not interacting with the rest of the world, we were in a bio-bubble. And I think because of the pure air in the jungle, you just feel healthy.

Q. Not just man vs animal, but Sheri’s premise also has Vidya Vincent breaking stereotypes and taking on the patriarchal mindset. Can we discuss that?

A. She’s challenging the patriarchal mindset without making it very obvious. She is a person of few words, shy, quiet and withdrawn and she doesn’t like to engage too much with people. So she’s not the kind of brazen person who will say ‘how dare’ you can expect a person in power and especially an empowered person to speak with a certain tone. But she’s not like that. She’s very soft-spoken and yet she does exactly what she wants to do. And This is why I feel a Sherni is not just one who roars, you don’t need to roar to be a Sherni. You can be quiet and reserved and you can be whoever you are and yet, you can be a Sherni, which is why I think each one of us is a Sherni.

Q. In the trailer, we see Vidya Vincent being gaslighted. Has there been any instance of this sort in real life?

A. Of course, I’ve been gaslighted by people. I think when I trust someone, or I guess when anyone trusts anyone, it becomes difficult to see when they’re being gaslit. It has happened to me. I didn’t even know what gaslighting was until a few years ago. And now that I know it, I’m well aware. When I feel that someone’s gaslighting me, then I just avoid that person because you can’t get manipulative people to change.

A. Of course. I think everyone knows that about me in my career, everyone’s had an opinion on what I should wear, what I should weigh, and all of that, and it’s damn annoying. And it used to bother me before, but it stopped bothering me. And when it stopped bothering me, people stopped talking. But I have to say my mother’s not given up on saying wear some jewellery.

Q. Do you feel when a woman is in a position of power, especially in male-dominated bastions, the patriarchal society that we live in, men find it difficult to take orders/instructions from a female even in this day and age?

A. Equally women find it difficult to give instructions to men. It’s because of our conditioning. Because we’ve been told that the man has to be in charge, or men have to be in charge and that we have to be told what to do because we don’t know what to do. This is why we struggle so much when we have dreams and we want to achieve them. And you know, we feel so much fear and successful women also feel guilt. It’s all the inflexions of the same malady. So, I think it’s not just men, it’s even women. We underestimate ourselves, we judge ourselves, because that’s what we’ve been told forever. Feminism is a practice more than anything else. You have to practice to be equal because you’re not used to it. What happens sometimes is when you ignore it, you’re perpetuating something. Sometimes when you talk about it to the other person, maybe even they are not aware of it, then they become aware of it. And that can only bring about change awareness.

Q. From The Dirty Picture, you embarked on this journey of being in lead roles in movies that focused on unconventional subjects and unique storylines. How do you look at this journey of having done so many strong and successful female-led films?

A. That’s not like, I planned to do it. But I wanted to do work that meant something to me. I wanted to do work that was an extension of my beliefs, that would excite and fulfil me. And therefore, I went ahead and made the choices that I made. But I think I was at the right place at the right time, and not only didn’t work for me, but it also began to change something in the cinema. But I cannot take the credit for any of that. But yes, it’s been an exciting and fulfilling journey so far. And I hope it only gets better from here.

Q. Now that you have had two films on OTT, are you willing to take up a web series?

A. Oh yes. I’ve been offered many but nothing’s really excited me to take the plunge because it’s a huge time commitment. Maybe if something feels irresistible I might take the plunge. You shoot for months and months on end, and maybe for a few seasons, so, you have to be ready for that mentally.

Q. There’s one other Amazon Prime series that has been the talk of the town and it’s ‘The Family Man’. Have you watched it?

Q. Not many know that ‘The Family Man actor Priyamani is your cousin. Would you like to say something about her?

A. Oh yes. But can you believe we’ve met once in our lives! We’re distant cousins. And we met on a film award stage because our families are not in touch. I’m given to believe that she’s a wonderful actor, and she’s doing really well for herself. More power to her.

Q. As for Sherni, fans are pinning hopes for an Oscar from the film. What do you have to say about that?

A. I love them all. I hope you feel the same way after watching the film. And if you do, then just you put the desire out into the universe. I hope it manifests.