UAE weather: Fog alert in some parts of Abu Dhabi till 8.00 am, hot and humid weather across Dubai, Sharjah, Ajman and other emirates 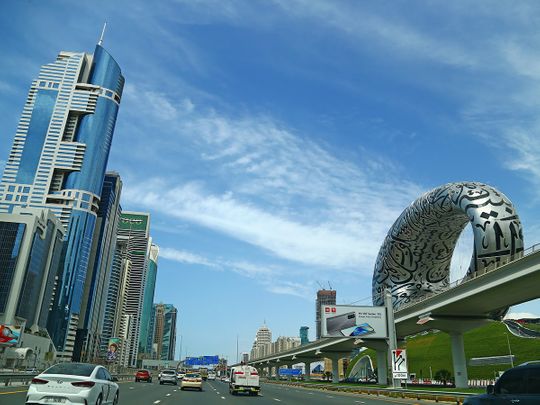 Be careful if you are hitting the roads in Abu Dhabi today, as a yellow fog alert, warning motorists of poor visibility, has been issued in some parts of the emirate.

“Fog formation with deterioration of horizontal visibility over most areas of the country until 8:00am,” said the National Centre of Meteorology in today’s weather forecast.

But, in general, UAE residents can expect another hot day with mostly sunny skies across the country.

According to the National Centre of Meteorology, skies in general will be sunny and hazy at times.

Low-lying clouds are expected on the eastern coast of the country.

A warm breeze will also blow sand across many parts of the country. The NCM said: “Light to moderate Southeasterly to Northeasterly winds, freshening at times, will result in blowing dust and sand over some areas with a speed of 15 – 25, reaching 40km/hr.”

The highest temperature recorded over the country yesterday evening was 46.1°C in Hatta (Dubai) at 3.00pm.

In the coastal areas, temperature highs will be between 37-42°C, and 32-38°C in the mountainous regions.

The NCM also said that relative humidity is expected to increase by night and Friday morning, especially over coastal and internal areas, causing fog and mist formation.

The sea will be moderate to rough by the afternoon especially Westward in the Arabian Gulf and slight to moderate in Oman Sea.

UAE weather: Fog alert in some parts of Abu Dhabi till 8.00 am, hot and humid weather across Dubai, Sharjah, Ajman and other emirates added by News89 Team on Jun 10, 2021
View all posts by News89 Team →