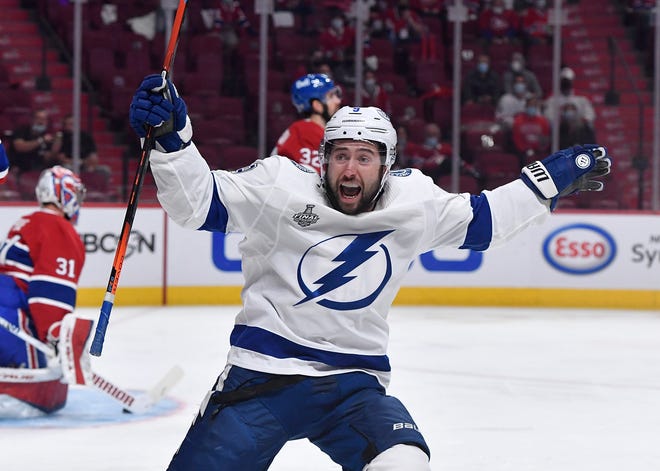 It was a festive atmosphere inside Montreal’s Bell Centre on Friday night as the Canadiens took the ice for their first home game in the Stanley Cup Final since 1993.

But the party was quickly quieted by the Tampa Bay Lightning, who jumped on the Canadiens early en route to a 6-3 win in Game 3. The Lightning now lead the series 3-0 and could capture the Stanley Cup for the second consecutive season should they complete the sweep in Game 4 on Monday night.

There has not been a sweep in the Stanley Cup Final since 1998. The Canadiens – who have a record 24 Stanley Cup wins – were last swept in the playoffs in 2009.

Even if they don’t sweep, the Bolts are now in great position to repeat. There have been just four comebacks from 3-0 down in the NHL’s 100-plus-year history. The 2016-17 Pittsburgh Penguins are the last NHL team to repeat.

“Obviously, what we did in the bubble last year (winning the 2020 Cup) was very special, and you want to relive that moment,” Lightning defenseman Victor Hedman said. “But at the end of the day, we’re not there yet. We need to win one more game but we put ourselves in a good position, obviously. But the fourth (win) is the hardest one to get but we’re going to do whatever it takes to win the next game…

“At the end of the day we’ve got more work to do and we’re not satisfied until that’s done.”

Here’s how the Lightning pushed the Canadiens to the brink and moved one win away from their second straight championship:

The Lightning jumped out to a 1-0 lead just 1:52 into the game as defenseman Jan Rutta’s shot from deep along the right wall eluded a heavily-screened Carey Price.

Things went from bad to worse for Montreal just a few minutes later as the Bolts made it 2-0 at the 3:27 mark on Hedman’s power-play goal with veteran Eric Staal in the box for delay of game. It was Tampa’s second power-play goal in the series on their seventh attempt vs. what has been a highly effective Habs penalty kill.

According to NBC, Hedman became the first player to score in all 12 months of the year – a byproduct of the COVID-19 pandemic’s impact on the NHL schedule and the Lightning’s deep runs the past two seasons.

Montreal coach Dominique Ducharme – back behind the bench following his quarantine after testing positive for COVID-19 – called timeout after Hedman’s goal.

The Habs righted the ship a bit, finishing the period with a 17-12 lead in shots. They also cut their deficit to 2-1 at 11:16 as forward Phillip Danault, who has done yeoman’s work with his defense, got his first goal of the playoffs off a nice rush.

“They’re an excellent team. They capitalize on every mistake we make,” Danault said postgame when asked about the Lightning’s fast start. “Our mistakes are huge. We need to limit our mistakes. We need to make small plays. We just need to be better.”

Unfortunately for the Canadiens, the second period was nearly identical to the first.

Nikita Kucherov restored the Lightning’s two-goal lead 1:40 into the second. Ondrej Palat got the primary assist as he wrangled Erik Cernak’s stretch pass and funneled it over to Kucherov, who deposited his eighth goal of the playoffs on the backhand.

Kucherov, who also picked up an assist on Hedman’s power-play goal, now has 32 points in 21 games in these playoffs. Per ESPN Stats & Info, Kucherov is just the third player to record a combined 66 points over two consecutive postseasons. The other two to accomplish that feat are Hall of Famers Wayne Gretzky and Mario Lemieux.

Just like the first period, it took just a few moments for Tampa to get another goal.

This time, it was Tyler Johnson cashing in at 3:33 of the second period, taking advantage of a lucky deflection off the skate of Mathieu Joseph.

Nick Suzuki cut into Tampa’s deficit late in the second period with a shot from the right wing that leaked through Lightning goalie Andrei Vasilevskiy.

Though he’d probably like the goal he gave up to Suzuki back, Vasilevskiy largely stood tall in the third period and finished the game with 32 saves.

Johnson effectively sealed the win with his second goal of the game on a solo effort with less than five minutes to go. He picked off a pass and then put the puck past Price on a rebound to give the Lightning a 5-2 lead at 15:19.

“I know how fun it was last year when we won so (I) want to do that again. You don’t know how many chances you’re going to get,” Johnson said. “Anytime you get this close, you really feel it.

“I think winning (the Cup) last year makes you even want to win it more and I think everyone kind of feels that way and we’re really excited. But there’s still a lot more to do, we still have one more game. We know the fourth one’s always the toughest and we’re going to have to have a really good game.”

Price finished with 24 saves on 29 shots against, giving up five goals for the second time this series.

Canadiens forward Corey Perry did provide an immediate answer to Johnson’s second tally 39 seconds later, patiently waiting out Vasilevskiy before sniping the puck in to cut the Habs deficit to two once again.

The game was sealed for good, though, when Lightning forward Blake Coleman scored an empty-net goal at 16:48 to provide the final margin.

“We’ve overcome adversity all season long,” Price said of the Habs. “Our backs are obviously against the wall, so we’re going to have to start bringing our best.”