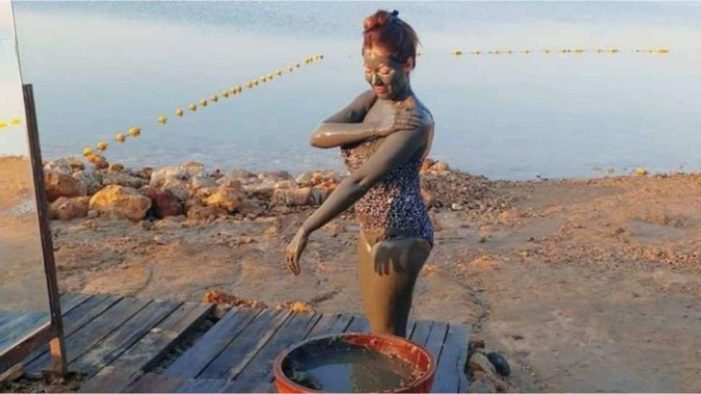 ‘Taarak Mehta Ka Ooltah Chashmah’ star Munmun Dutta, fondly known as Babita Ji is not only very glamorous on the show but the actor is extremely fashionable in real life too. Munmun shares snippets of her life, her photoshoots and vacations which often sets the internet on fire.

On Saturday (July 17), Munmun shared a series of throwback photos from her trip to Jordan where she is rocking sexy monokini. In the picture, Munmun can be seen applying mud on her body on the Dead Sea beach. She then gives a few filmy poses for the camera before washing the mud away.

“Dead Sea and it’s therapeutic mud bath. Jordan, 2017,” captioned the post. While sharing the photo she also called herself ‘dame traveler’ and ‘the wandering tourist’.

Fans went gaga over Munmun’s pictures and showered her with praises in the comment section. “Cutness oveloaded,” wrote one user while another commented, “Love you.”

A few days back, Munmun had shared a bunch of throwback photos from her solo trip to Jordan in 2017. The actress can be seen rocking gorgeous outfits against breathtaking backgrounds. While sharing the pictures, she wrote, “#Photodump from Jordan … 4 years back … 2017 Wadi Rum, Petra, Jerash, Amman , Aqaba Red Sea and more..So glad that I chose to work and travel the world , explore and experience everything that came along with it …”

The ‘TMKOC’ actress also recently got vaccinated and share the news with her fans on Instagram. She also urged her fans to get inoculated. Munmun often stays in the news for one reason on another. Most recently she made headlines after she used a casteist slur in her social media video. An FIR was also filed against the actor. She later apologised for her insensitive remark and termed her ‘language barrier’ as the reason for her mistake.

Munmum made her acting debut with the TV show ‘Hum Sab Baraati’ in 2004. She has also featured in Kamal Haasan’s ‘Mumbai Xpress’ and 2006 film ‘Holiday’. Since 2008, Munmum has been essaying the role of Babita Iyer in one of the longest-running sitcoms on television ‘Taarak Mehta Ka Ooltah Chashmah’.