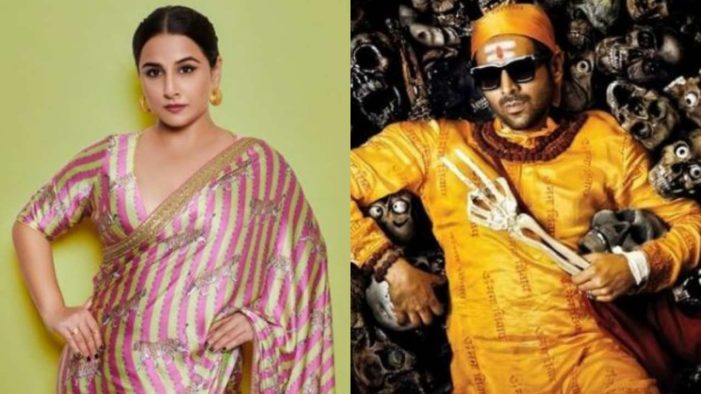 Vidya Balan, who has been receiving rave reviews for her recently released film ‘Sherni’ on Amazon Prime Video, has addressed questions about her involvement with the upcoming film ‘Bhool Bhulaiyaa 2’, which stars Kartik Aaryan, Tabu and Kiara Advani in lead roles.

It is to be noted that Vidya Balan was the lead in the Priyadarshan directed blockbuster hit film ‘Bhool Bhulaiyaa’ of which the upcoming film is a sequel. Talking about ‘Bhool Bhulaiyaa 2’ and her involvement in it, Vidya has clarified that she is not a part of the movie.

In ‘Bhool Bhulaiyaa’, Vidya played a woman who gets possessed by the ghost of a royal dancer when she visits her husband’s ancestral home in Rajasthan. The film had Akshay Kumar essaying the role of a psychotherapist, Shiney Ahuja as Vidya’s husband, Ameesha Patel, Rajpal Yadav and others.

Speaking to Bollywood Hungama, Vidya said she will not be a part of the sequel. On being asked if the sequel will be able to match up to the original, she said, “I think, that would be very unfair to wonder whether it will be able to match. Bhool Bhulaiyaa was great and I think even though they are using the title, Bhool Bhulaiyaa 2 is a completely different film. I’d love to watch it though.”

When asked if she was offered the film, Vidya replied, “Let’s just say I am not in the film. So I am not going to say anything more.”

Meanwhile, talking about her film ‘Sherni’ in a recent interview, when asked who is the ‘Sherni’ in her life, Vidya said, “As cliched as it sounds, my Mother! Because she’s always held her own and stood her ground. I think she has given my sister and me the courage to just be ourselves. My father and mother have both contributed to who we are, just like all parents do but they’ve contributed in different ways I think. A lot of my fearlessness comes from my Mother.”

‘Sherni’ is backed by Amit Masurkar’s directorial brilliance. Diving into the life of a Vidya Vincent, an upright Forest Officer, the tale unfolds as she tries to strike a balance between man and animal while also trying to find herself in a hostile environment.