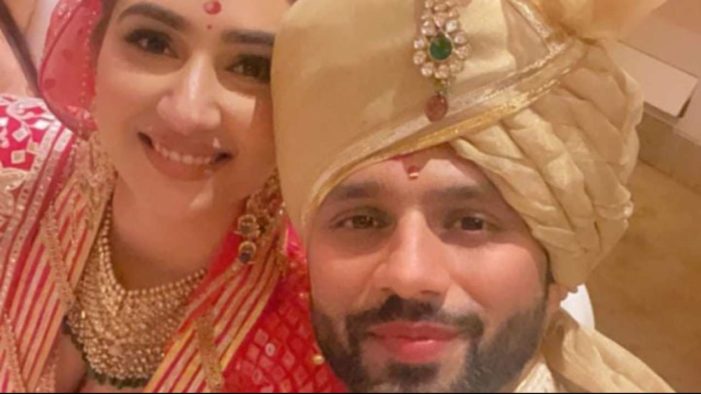 Disha Parmar and Rahul Vaidya have tied the knot. In the company of their relatives and friends, the pair married on 16th July 2021. While photos from the wedding ceremonies have been published on social media, the bride and groom have now posted their ‘first selfie’ as a married couple. Dishul Ki Shaadi photos went viral in no time.

Rahul Vaidya posted a photo on his Instagram Stories in which he and his wife, actress Disha Parmar, posed for a selfie. While giving a closer look at their trousseau, the pair smiled for the camera. In the photo, Disha’s sindoor was also clearly evident. After the musician proposed to the television actor on national television, Rahul and Disha married a few months later. Rahul proposed to Disha while still in the ‘Bigg Boss’ house, after realising his feelings for her during his time on the show. Disha said yes and appeared on the show in February to celebrate Valentine’s Day with him.

Their first look as bride and groom was also out. The couple was brimming with joy as they happily posed for the cameras.

Netizens are gushing over the gorgeous couple.

While Disha looked stunning in a red lehenga, Rahul Vaidya looked dashing in a cream sherwani with a beige turban and a waist belt

Newlyweds Disha Parmar-Rahul Vaidya are all smiles in their FIRST selfie as husband-wife added by News89 Team on Jul 17, 2021
View all posts by News89 Team →