Meet Aziz Al Harbi of RoboStores, the Saudi expat who is at home in the UAE 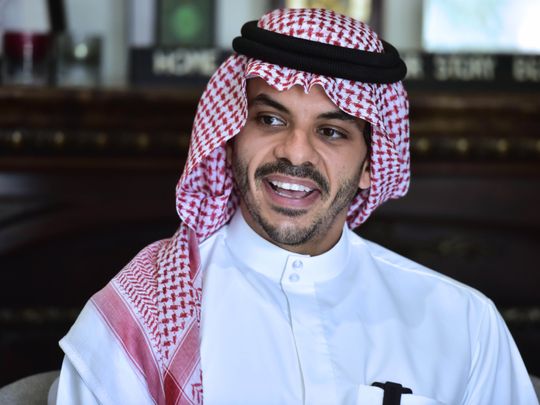 Dubai: Several expats who come to the UAE in search of greener pastures continue to live here. Their children grow up in the UAE and make it their home.

Saudi expatriate Aziz Al Harbi, 32, moved into the UAE with his family when he was 14 years old. His father Bander Al Harbi was then making a career move into the hospitality industry in Dubai. Over the years, Dubai has become home to Al Harbi.

“My parents share their time between the US and the UAE. Two of my siblings live in the US. But my younger brother and I love it here. This is the place where I finished high school. This is where my friends and family live. This is home!” said Al Harbi.

Who is Aziz Al Harbi?

Aziz Al Harbi is the COO of RoboStores – a robotic warehousing and fulfillment centre located in Al Quoz.

RoboStores enables e-commerce companies whether small, medium or large to bring their products to the market.

Aziz Al Harbi attended school at the American School of Dubai (ASD) and completed his high school education here. He did his under-graduate studies in finance at the Boston University in Boston, USA.

Being half-American (his mother is from Seattle, Washington), Al Harbi was always fascinated with studying abroad.

“I am from the west coast, but I wanted to get away from that side and go to the east coast and study. And so I headed to Boston University in Boston, Massachusetts. It is a great college town. There was so much learning there. The educational spirit is everywhere and you interact with students from the top universities in the world such as Harvard and MIT among others.”

Aziz Al Harbi opted for finance as his major. He recalled his study in US during 2007-2009 when the recession originated.

“It was an interesting time to study finance at the time. After a couple of years I realised this isn’t really what I wanted to study, but it was too late to change, so I continued with that major.”

My earliest memories of Dubai felt like living in the desert. There was no JLT or Dubai Marina back then. The only place I vividly remember was the Hard Rock Cafe with the guitar. When we saw that, we would know what part of Dubai we were in.”

And so, he added another major: Operation management. “I also added a minor in economics, so I had a nice platter of topics.”

Aziz said he fell in love with operation management. “With this, I knew where I wanted to be in life.”

After his graduation in the US, Al Harbi knew he wanted to be back in Dubai. “It felt like coming home after my studies. I knew I had a connection to this place. It just drew me back here.”

Beginning a career in Dubai

Back in the UAE, Aziz started working as a consultant for a hotel management company.

“And then I had a meeting with my current CEO and Chairman. We sat down and discussed how to make his ideas work. He wanted to create a store with robots moving around. At that time it was a new concept in the region. But I also knew there was a shift towards e-commerce with businesses. I helped realise his vision.”

Why Dubai is home

“My career began here with my friends and family. So even though I am a Saudi national, I love it here.”

“RoboStores now has a centre serving multiple countries across the world in the region and we do deliver worldwide. Our idea is to take this concept to another level and replicate it in different regions, markets and countries, whether it is Egypt or Saudi Arabia.

Aziz is the eldest of four children. His younger siblings, brothers Wyle and Laith and sister Lana, are all very close to each other. His younger brother works in Dubai.

His father Bander was employed with InterContinental Hotels Group (IHG) and after 30 years of service, he ended up as the VP of IHG.

“My mother worked as an English teacher. She was also involved as a librarian at multiple schools in Jeddah, Saudi Arabia,” Al Harbi said.

There is not a sport that Al Harbi has not played. Currently he does paddle tennis a lot besides CrossFit.

“Respect is considered a big virtue in Saudi Arabia and in the UAE. So, that’s the number one value I have taken from my parents. I also believe that family comes first. My father would say if you have one stick it’s easy to break it, but if you have five sticks together, it is harder. So family always comes first to me.”

“In my earliest memories of Dubai it felt like living in the desert. There was no JLT or Dubai Marina back then. The only place I vividly remember is the Hard Rock Cafe with the guitar. When we saw that, we would know what part of Dubai we were in.”

“One of the reasons why I don’t want to be anywhere else in the world is because Dubai is a land of opportunities. It is a land where one touches ground and never wants to leave.”

We are in the thick of a pandemic, the challenges are always going to be there. “So stay grounded. Stay true to yourself.”