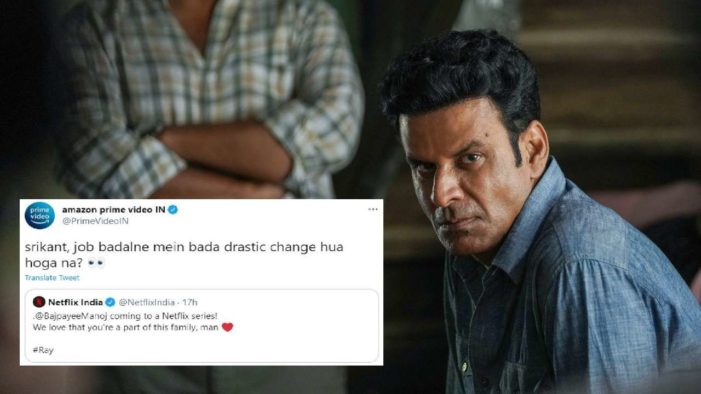 We all hear about streaming wars and how intense that space is between competitors, but you turn to social media and Amazon Prime Video and Netflix are a treat to their fans!

The latest instance of their camaraderie surfaced yesterday as both brands engaged in a fun banter over Manoj Bajpayee’s debut with Netflix for his upcoming series.

‘The Family Man’ season 2, which launched last week, has been a blockbuster success with love pouring in from critics and consumers alike. Following the trailer release of its upcoming original ‘Ray’, Netflix posted a quirky message on social media saying “@ManojBajpayee coming to a Netflix Series. We love that you are a part of this family, Man – Ray”

While the series of tweets went viral in no time, the actor finally took to Twitter to respond to the trend by posting “Hahahahaha, that’s top class banter!! Job nahi role badla hai!!!

However, this is not the first time that Amazon Prime and Netflix have engaged in some of the most fun banter on social media. In 2020, when the world was waiting with bated breaths for the second season of ‘Mirzapur 2′, Netflix put out a video featuring Ali Fazal and Shriya Pilgaonkar. Fans inundated the comments asking about season 2; captioning the video, “@primevideoin Batao Bhai, log puch rahe hai”, to which Amazon Prime Video had cheekily replied tweeting “arey, seedha seedha bolo tumhe dekhna hai?.’ Netflix retorted to the same with “@yehhainmirzapur you say Guddu bablu we say Atapi Vatapi.”

Mirror Mirror on the wall, is this the friendliest rivalry of them all? Well, if history is anything to go by, we can bet on that for sure!