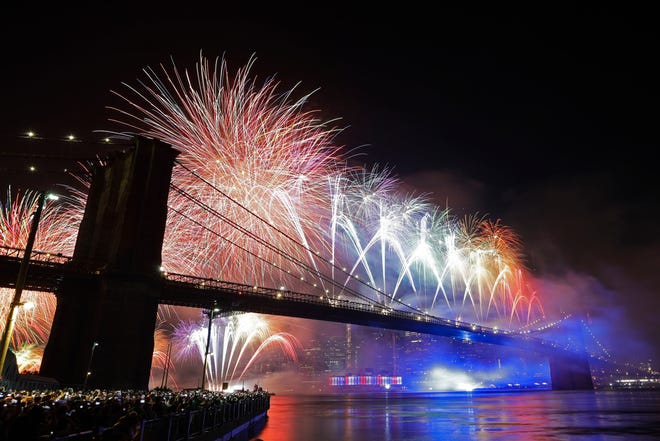 It’s July 4 weekend. Here’s what you need to know.

Planning to get away for the Fourth of July? Be prepared to share the road, as more than 47.7 million Americans are expected to travel for Independence Day. In the nation’s capital, President Joe Biden is set to host a group of essential workers and military families on the South Lawn of the White House. And some history in case you attend any barbecues this holiday weekend: July 4 wasn’t the only day that the Continental Congress voted for independence. Twelve of the 13 colonies had also approved a resolution calling for independence on July 2, 1776. Another fun fact: Many of the original signers didn’t ink their names on the Declaration of Independence until Aug. 2, 1776.

Officials in Florida scrutinize safety of other buildings

Concern is rising for other buildings in Florida a week after a 12-story condominium collapsed in the town of Surfside. On Friday, officials in nearby North Miami Beach ordered the evacuation of a 156-unit tower after a review found it structurally and electrically unsafe. “It could have been our building instead of Surfside,” city Commissioner Fortuna Smukler said. The mayor of Miami-Dade County had suggested an audit of buildings 40 and older to make sure they are in compliance with the local recertification process. The condo in North Miami Beach is the first to be evacuated.

Hurricane Elsa hits the Caribbean. Is Florida next?

Elsa, the first hurricane of the 2021 Atlantic storm season and a Category 1 as of Friday, is tracking over the Caribbean this weekend. It may affect Florida as Monday approaches. Florida Gov. Ron DeSantis on Friday said he is considering an emergency order because South Florida — site of recovery and rescue efforts at the collapsed Surfside condo building — could get tropical-storm-force winds Sunday night. Hurricane watches or warnings have been issued in the Dominican Republic, Haiti, Jamaica and Cuba.

Trump to attend rally in Florida ahead of Fourth of July

Former President Donald Trump will bring some extra fireworks to Sarasota’s July 4 holiday weekend with an appearance Saturday at the Sarasota Fairgrounds, his first big rally in Florida since the election. The Sarasota region has been a source of strong political support for Trump and a launching pad for his political ambitions, making it a fitting place for one of his first post-presidential rallies, which are a potential prelude to a 2024 presidential run. Trump’s campaign-style rally comes at a fraught time for him: The organization bearing his name in New York was indicted this week, and a potential presidential rivalry with Florida governor and protege Ron DeSantis may be on the horizon.

Hot dog eating contest is back at Coney Island

The Nathan’s Famous Hot Dog Eating Contest is set to return to Coney Island on Sunday. Last year, the annual Fourth of July event took place at a private location with plexiglass in between competitors due to COVID-19 restrictions. Hot dog devouring juggernaut Joey Chestnut, the world record holder — 75 hot dogs with buns eaten in 10 minutes — will be aiming for his 14th Mustard Belt title in 15 years. The women’s championship will begin at 11:30 a.m. ET on ESPN3 before the men’s competition airs live at noon on ESPN.