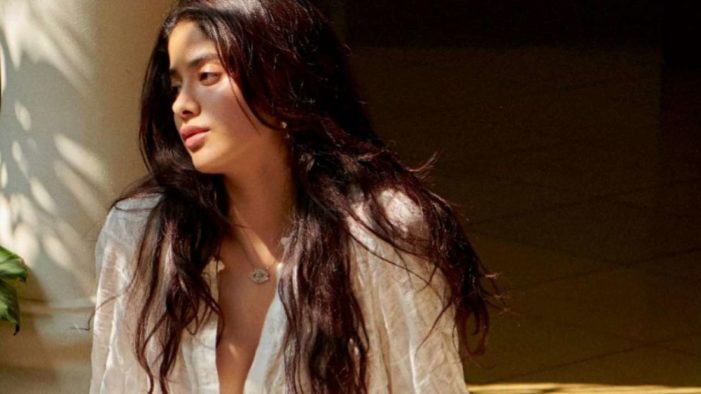 Janhvi Kapoor is among the fittest actors in Bollywood and she never shies away from flaunting her bikini bod. The actor often takes to her Instagram page and shares photos donning stylish swimwear and grab eyeballs on the Internet instantly. On Wednesday, Janhvi posted a series of photos taking a dip in the sea wearing a mix-n-batch bikini. She also posted a photo with her friend Orhan Awatramani holding hands while running on the beach.

In the photos, Janhvi is seen in a white bikini top and printed bottoms. She captioned her post stating, “Maybe half the beauty of every blurred sunset is that it is fleeting.”

Talking about the same, the ‘Dhadak’ actor told Elle India, “One thing that I’ve learned is that I’m happy being on my own and don’t feel scared to be lonely anymore. I’ve finally gotten to a place where self-sustenance doesn’t scare me. Apart from that, I worked a lot on my painting and cooked for a month or two.”

When asked about her upcoming projects, Janhvi told the magazine, “I just wrapped up my film, ‘Good Luck Jerry’. I’ve been in Punjab for its filming for the past three months, and I’ve got so attached to the place, team and crew and the character I’m playing. I’m going to resume shooting ‘Dostana 2’ next, and then we’ll see what else is in store for me.”