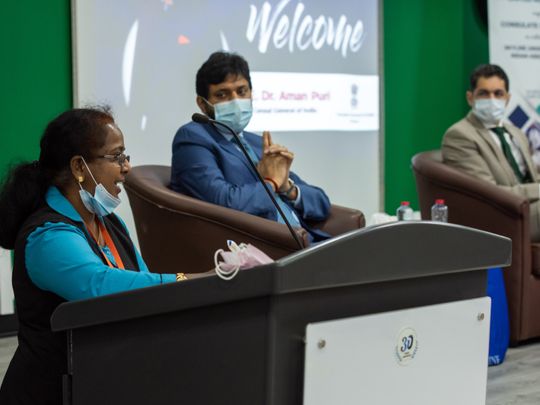 Sharjah: Indian blue-collar workers in the UAE are being upskilled under a new drive led by the Consulate General of India in Dubai, officials announced during a launch ceremony of the campaign on Tuesday.

To begin with, the consulate, in collaboration with Skyline University College (SUC) in Sharjah and Indian Association Sharjah, is organising a two-day training for blue-collar workers, being held from Tuesday to Wednesday at Sharjah Indian School.

The plan is to collaborate with educational establishments and Indian associations in the UAE in providing upskilling and reskilling for the workers, such as English language and communication skills, basic computer literacy, and soft skills, as well as to boost their confidence level, officials said during the launch ceremony at SUC.

In his address at Tuesday’s ceremony, Dr Aman Puri, Consul General of India in Dubai, said Indian blue-collar workers are highly sought by employers in the UAE owing to their “hard working and law-abiding nature”. More than 3.3 million Indians live and work in the UAE, with some 65 per cent of them estimated to be from the blue-collar category, he added.

“Therefore, it is imperative that we complement the expectations of our gracious workforce in terms of their skill sets. Having the largest working diaspora in the UAE, it is natural that the Indian Consulate is always interested in understanding about the skill sets that can enhance the employability and productivity of the Indian human resources in the UAE,” Dr Puri said.

“With the rapidly evolving global technological landscape, regional economic conditions, and COVID-19, it is critical for us to keep updated with the requisite future skill sets … The COVID-19 pandemic has brought great challenges for Indians working in the UAE and several sectors were adversely impacted, including construction, aviation, tourism, and hospitality.

“Several workers have lost their livelihood and had to return to India. Meanwhile, the COVID-19 pandemic has also altered the conventional workspace and has ushered in innovative work environments, and have devised mechanisms to allow employees to work from home. Several of these aspects are likely to stay. It is therefore important that we accept and adjust to the new realities.”

Since the upskilling programme was launched earlier this year, the consulate has received interest from several educational institutions and Indian associations who will “gladly volunteer to provide the support for the training of blue collar workers”.

Dr Puri said: “We are extremely grateful to universities, schools, Indian associations, and organisations who have collaborated and partnered with the Indian consulate to work on this upscaling model”.

As part of the collaboration, SUC is providing the training for 245 blue-collar workers, including non-teaching staff of Sharjah Indian School as well as staff of Indian Association Sharjah.

Speaking at the ceremony, SUC vice-chairman Nitin Anand said upskilling and reskilling is the need of the hour for all categories of employees and even business persons. Even the SUC community, for example, had to learn about and adjust to the new virtual working environment brought on by the pandemic, Anand added. SUC had been trying to hold training for workers but the onset of the pandemic had caused delays, he said. Now, with the support of the consulate and Indian association, SUC has been able to go ahead with those plans, Anand added, which will be expanded to any organisation and workforce who requests the training from SUC, free of charge.

Workers to be enrolled

Some of the trained workers could also be eligible to join a full-time degree programme at SUC at 100 per cent scholarship. In coordination with the consulate, the criteria for eligibility for at least two students — one male and one female worker — for an undergraduate programme at SUC would be implemented every year, under guidance from the consulate, Anand said. SUC plans to extend this special workers’ scholarship programme to the postgraduate level as well in the future, he added.

SUC vice-chancellor Dr Mohammad Inairat said: “We believe this [training] is part of our social responsibility [at SUC], we have to contribute to the development of the society. And this programme is coming at a time when it is highly-needed, especially during this pandemic.”

E.P. Johnson, president of Indian Association Sharjah, said the association’s first meeting, held earlier this year for its managing committee, had focused on the welfare of blue-collar workers. He thanked the consulate and SUC for their support in the upskilling drive. Since it has been difficult or impossible to start the programme at workers’ housing facilities, due to the pandemic, the association has started with its own staff first, Johnson added.

Two non-academic staff members from Sharjah Indian School, who identified themselves as Rashid and Usha, also spoke during the event. They thanked all stakeholders for their support. Usha said their main request was for communication skills and computer literacy.