'I will protect my brother's name': Family of Minneapolis man killed by police demand accountability 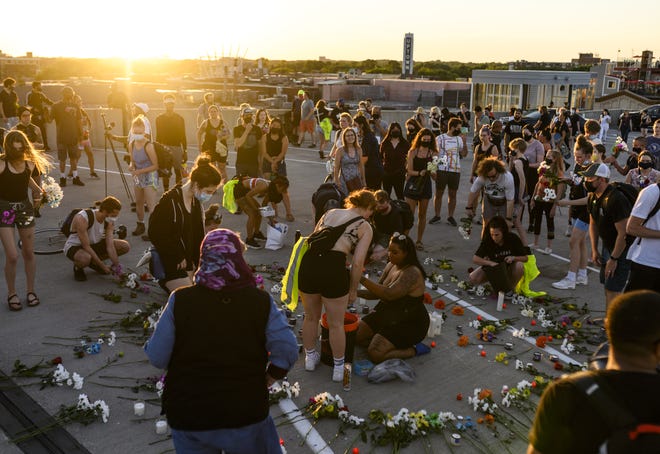 Family of the man fatally shot by two sheriff’s deputies in Minneapolis on Thursday tearfully pleaded for transparency and defended his character and history.

While authorities did not immediately release the man’s name, family and friends identified him as Winston Smith Jr., a 32-year-old father of three.

At a Friday news conference, Smith’s sister, Tieshia Floyd, said her brother’s reputation had been smeared and any past mistakes he made did not justify his death.

“My brother was kind,” she said. “No, he wasn’t perfect. None of us are. He was trying to turn over a new leaf but they took that away from him.”

“I love my brother, and I just don’t want the world to judge him for what’s being put out there,” she added. “I will protect my brother’s name until justice has been served.”

Speakers also asked for anyone who has cellphone footage of the shooting to come forward with it.

No video footage of the incident has been released. The Bureau of Criminal Apprehension, which is leading the investigation, said there is no squad camera footage of the shooting, and the U.S. Marshals Service does not allow body cameras for officers on this task force.

Minnesota Justice Coalition President Johnathon McClellan questioned why police would not want to release footage if they believe their actions were justified, saying law enforcement may have something to hide.

“It is important that we have transparency and accountability,” McClellan said at the news conference.

“We also question these task forces that produce cowboy cops that make up their own rules and circumvent best practices, lack proper oversight and display patterns and practices that terrorize and do not protect and serve,” he added.

Two sheriff’s deputies — one from Hennepin County and one from Ramsey County — were involved in the shooting, according to the BCA.

In a statement sent to USA TODAY, the U.S. Marshals Service said that its task force was trying to arrest the man on a warrant for illegal possession of a firearm. They said the man “failed to comply with officers’ commands” and “produced a handgun resulting in task force members firing upon the subject,” according to the statement.

Smith’s loved ones remembered him as a comedian who wrote comedy skits for social media and as a father who never missed a birthday party or an opportunity to spend time with his children.

“He is a character,” his mother, Tijuana Wilson, said at the news conference. “He’s a fun person. And it’s a shame they keep killing our young Black people.”

“He will be missed,” she continued.

Rep. John Thompson said he is tired of Black men in his state being killed by police and called for police reform and the reinvestment of resources into community organizations. He said he knows, “there’ll be another dead Black man here in the state of Minnesota this year unless our legislators take it upon themselves … to pass some meaningful legislation here in this state when it comes to police reform.”

Protesters demanded transparency for the second night of demonstrations Friday night. As night fell, lines of officers stood guard near dumpster fires in the street.

Minneapolis has been on edge since last year’s death of George Floyd, a Black man who was pinned to ground by Minneapolis police officer Derek Chauvin, who was convicted in April of murder and manslaughter. Protests also followed the fatal police shooting of Black motorist Daunte Wright in the nearby suburb of Brooklyn Center in April.

Before the Thursday shooting, tensions were rising as crews removed concrete barriers around a Minneapolis intersection informally called George Floyd Square, where community members and activists left artwork and flowers in a memorial to Floyd.

'I will protect my brother's name': Family of Minneapolis man killed by police demand accountability added by News89 Team on Jun 5, 2021
View all posts by News89 Team →