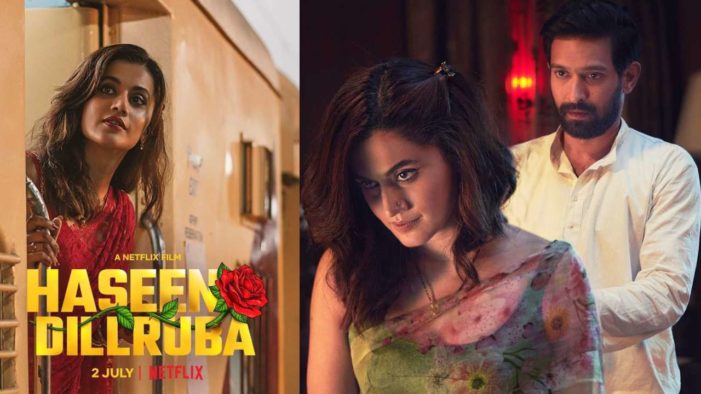 The trailer of Taapsee Pannu’s new film ‘Haseen Dilruba’ has already created a buzz among her fans and they cannot seem to contain the excitement. The trailer is full of drama, fun, emotions and of course some explicit scenes. The film also stars Vikrant Massey and Harshvardhan Rane.

In their recent interview with RJ Siddharth Kannan, Taapsee spoke about the awkwardness that surrounds a bold scene when watching it with a family. The ‘Thappad’ actor recalled watching bold scenes as a teenager with her father and how awkward everyone would get.

She said that her father used to watch English films and since there was only one TV at home, they all had to watch the same thing and did not know what to do when a bold scene appeared. “We had just one TV, so if dad would start watching, we’d have no option but to watch along. We didn’t go out to watch films, per se. It’s normal to have lovemaking or a certain kind of explicit scene. But it becomes very awkward when it’s next to your teenage daughters. So both of us are sitting there, and it’s almost like all of us have started sweating, trying to understand who should do what,” she said. The only way out of such situations was to either change the channel or go and get a glass of water, Taapsee mentioned.

Vikrant Massey admitted during the interview that he was caught watching an adult film by a family member. “My cousins and I were watching, and my masi (aunt) walked in. We never thought she’d be up at 3 am… Then the walk of shame. I was staying at my nani’s house for a few days, and whenever I’d run into my masi, getting a glass of water or something, I’d be ashamed to look her in the eye. It was very, very embarrassing,” he said.

‘Haseen Dilruba’ will release on July 2 on the online streaming platform, Netflix.