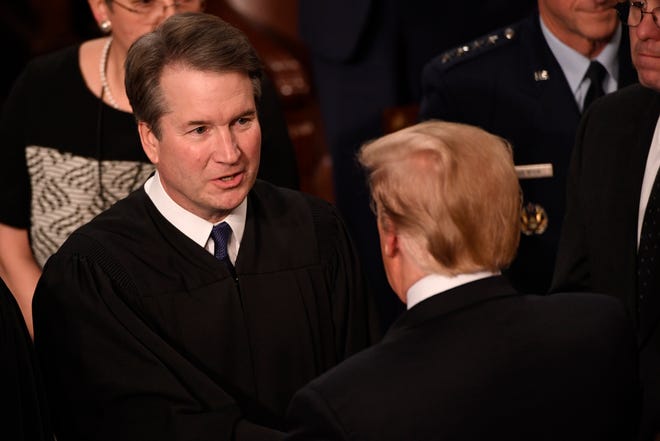 The FBI has acknowledged receiving more than 4,500 tips during its background investigation of Supreme Court Justice Brett Kavanaugh, prompting a new wave of criticism from Senate Democrats who have long questioned the bureau’s vetting process nearly three years after Kavanaugh’s Senate confirmation.

While Kavanaugh was confirmed by a narrow majority (50-48) his confirmation was defined by the emotional testimony of California university professor Christine Blasey Ford who accused the nominee of sexually assaulting her in the early 1980s and Kavanaugh’s angry denials.

In a June 30 letter made public by lawmakers Thursday, assistant FBI director Jill Tyson does not elaborate on the substance of the tip information.

Tyson, responding to earlier inquiries from Sens. Sheldon Whitehouse, D-R.I., and Christopher Coons, D-Del., said Kavanaugh’s nomination marked the first time that an FBI tip-line had been established to receive information during a Senate confirmation inquiry.

“The admissions in your letter corroborate and explain numerous credible accounts by individuals and firms that they had contacted the FBI with information highly relevant to … allegations’ of sexual misconduct by Justice Kavanaugh, only to be ignored,” Whitehouse and Coons said in a letter to FBI Director Christopher Wray that was joined by five other Senate Democrats. “If the FBI was not authorized to or did not follow up on any of the tips that it received from the tip line, it is difficult to understand the point of having a tip line at all.”

Seizing on the FBI’s newly-disclosed letter, Ford’s attorneys, Debra Katz and Lisa Banks, referred to the bureau’s handling of the Kavanaugh inquiry as “a sham and major institutional failure.”

“Not only did the FBI refuse to interview Dr. Ford or the corroborators listed in our letter to FBI Director Wray, it failed to act on the over 4,500 tips it received about then-nominee Kavanaugh,” the attorneys said. “Instead, it handed the information over to the White House, allowing those who supported Kavanaugh to falsely claim that the FBI found no wrongdoing.”

The FBI’s Security Division, which handles background investigations for nominees, provided “all relevant tips” to the White House Counsel’s Office, which had requested the review, Tyson said. The official’s letter, however, does not say how much was shared with the White House.

In the FBI letter, Tyson said the bureau’s responsibilities in background investigations of nominees differ from its criminal investigative functions. In cases involving presidential nominees, the FBI gathers and provides information to the White House to assist officials in determining “suitability” for office.

In its background investigative role, the FBI conducted the Kavanaugh review at the request of the White House Counsel’s Office, interviewing 49 people during the course of five days before delivering the results on July 18, 2018.

Two months later, following the public disclosure of the Blasey Ford allegations during wrenching sessions of the Senate Judiciary Committee, the White House requested a supplemental — yet limited — inquiry. During a period of six days, the FBI interviewed an additional 10 people.

“Because the FBI was again acting in its role as (background investigator) and not as a criminal investigative entity, the authorities, policies, and procedures used to investigate criminal matters did not apply,” Tyson wrote. “The FBI completed the limited inquiries on October 4, 2018, and provided the results to the requesting entity (the White House).”

Wade Henderson, interim president and CEO of the Leadership Conference on Civil and Human Rights, Thursday asserted that review had been “grossly mishandled.”

“The Trump White House and Senate Republicans shamefully stifled an investigation to rush the process and guarantee their nominee a seat on the Supreme Court,” Henderson said. “These unconscionable actions undermine the Senate’s constitutional role and continue to cast a shadow on the integrity of the Court.”