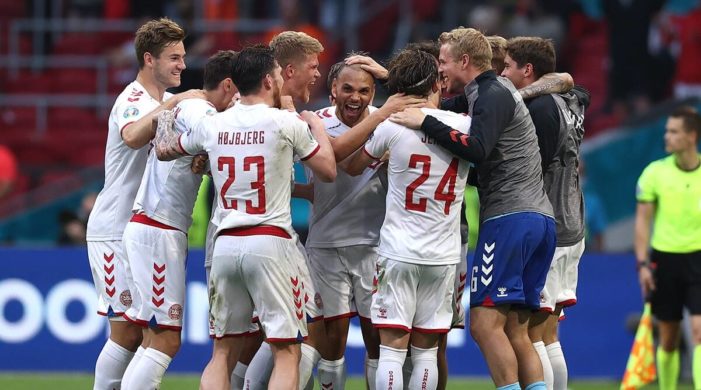 From the despair of seeing a teammate suffer cardiac arrest to the European Championship quarterfinals, somehow Denmark keeps on going.

Denmark will face the Czech Republic on Saturday, exactly three weeks after midfielder Christian Eriksen collapsed on the field in the team’s opening game and had to be resuscitated with a defibrillator.

While Eriksen recovers — initially in the hospital and now at home — Denmark has improved at Euro 2020. A 4-1 win over Russia got Denmark out of the group stage after two losses. Beating Wales 4-0 in the round of 16 matched the team’s best showing since “Danish Dynamite” won the 1992 European Championship.

“Culture-wise, there are similarities. Values of sticking (together), one for all and all for one,” Denmark midfielder Pierre-Emile Hojbjerg said Thursday.

“There’s this pride also to be playing for your country and all these values that I don’t think have changed too much since 1992.

“But my biggest respect to the guys in ”92 because they went on to win it. We haven’t done anything yet.”

???????? Denmark’s remarkable journey to the quarter-finals…

Since the “shock” of Eriksen”s sudden collapse, Hojbjerg said, Denmark has gone through huge emotional ups and downs.

“Now we’re in the quarterfinals, so it’s been a bit of a rollercoaster, a big one,” he said.

“And the good thing is that we are still hungry. We’re still determined to push for more.”

More than half of the 26-man squad was not yet born when Denmark beat Germany 2-0 in the 1992 final. The only European quarterfinal appearance since then came in 2004, a 3-0 loss to the Czech Republic. Hojbjerg was 8 years old back then and recalls he was “not very happy” he couldn’t watch the match because of a school trip.

That tournament ended in disappointment for the Czechs, too. They lost to eventual champion Greece 1-0 in the semifinals. As Czechoslovakia, the team won the European title in 1976. As the Czech Republic, the high point was being runner-up to Germany in 1996.

Both Denmark and the Czech Republic have been at their best at Euro 2020 when playing high-intensity, physical soccer against opponents who wanted possession. They could end up canceling each other out in the quarterfinals. That’s playing on Denmark coach Kasper Hjulmand”s mind, so much so that he admitted he was disappointed the Czech team upset the Netherlands 2-0 in the round of 16.

“I would rather have played the Netherlands,” Hjulmand told Danish broadcaster DR on Monday. “Now we’re facing a team for the first time (in the tournament) that I think can match our own intensity.”

Few Danish or Czech fans will be in the Baku Olympic Stadium for the game. Only Turkey, Azerbaijan’s close ally, has had more than a couple hundred fans at games in the city so far.

“In my view it doesn’t really make sense (to play in Baku). We are a bit frustrated but we respect this decision,” Czech Republic midfielder Michal Sadilek said through an interpreter on Thursday.

“We hope for any support we can get at the stadium and we are going to play so that we can have the fans at our next game.”

Plans for a Czech charter flight to Baku fell apart because not enough fans agreed to go. Denmark may have up to 1,000 supporters and offered 50 of its most loyal fans a ride on the federation’s plane.

Denmark has felt closer than most teams to its fans, who roared the team on to beat Russia in Copenhagen. In Amsterdam, too, the Danes were the local favorites in what felt like a home game against Wales.

“Every time we put on the shirt, every time we wear the badge of the Danish national team, we are playing for the country, we are having the country with us,” Hojbjerg said.