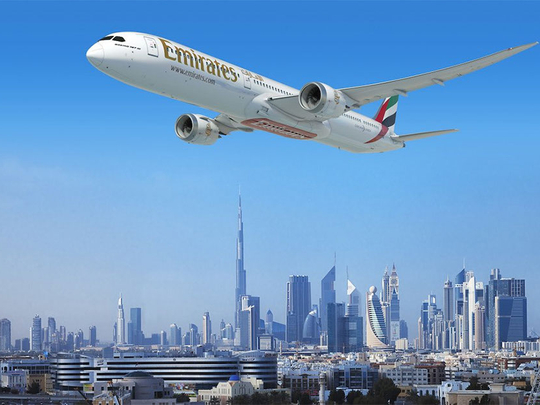 • Over 2.5 billion visitors land in Dubai in the last five months

• 50 per cent of Emirates passengers are first-timers to Dubai

• Over 3.6 billion searches for new places to travel on Emirates website

• 30,000 passengers expected to travel monthly on Emirates during EXPO 2020 Dubai

En route Miami from Dubai: The vital role played by Dubai in opening up to tourists and business travellers with stringent safety protocols in place has enabled Emirates to launch new flights and recover much of its pre-pandemic network, even as it has refunded tickets worth Dh8.5 billion to passengers impacted by flight disruptions amid COVID-19, a top official has revealed.

Addressing a media roundtable ahead of the airline’s inaugural flight to Miami (EK 213), which took off in the wee hours today (July 22), Adnan Kazim, Chief Commercial Officer, Emirates, said today’s flight to Miami, the airline’s 12th destination in the US, signals a strong confidence in travel resurgence for Emirates, which has resumed passenger services to 124 destinations globally and will have recovered close to 90 per cent of its pre-pandemic network by the end of the month.

He said the confidence-building measures taken by Dubai have resulted in an increase in monthly arrivals to the emirate over the past five months. “The number of visitors to Dubai has exceeded 2.5 billion, according to DTCM (Dubai Tourism),” he said, adding that in the case of Emirates too, 50 per cent of its passenger traffic was headed to Dubai as an end-destination.

“That’s a positive signal showing how the world views Dubai as a brand and as a name,” he said, letting on that 50 per cent of those who visited Dubai on Emirates flights during this period were first-timers.

He said Emirates also carried out a multi-million dollar global campaign to promote Destination Dubai last winter, to let the world know that the emirate is open for business and tourism. The campaign, which offered attractive packages, included free access to hot tourist spots, providing added value. Similarly, the introduction of the Business Rewards product had seen a positive trend, with 250 SMEs coming on board already.

EXPO 2020 Dubai and other events

Kazim pointed to a series of factors that have helped in Dubai’s travel resurgence during otherwise challenging times.

“We are seeing positive bookings coming along ahead of the winter months, mainly driven by EXPO 2020 Dubai and other events happening in Dubai, including the European Tour Golf, UAE’s Golden Jubilee celebrations, Rugby 7 and Dubai Air Show. These events only attract more tourists,” he said.

Touching upon the industry-wide trend, Kazim said IATA has projected that airlines globally will achieve a 52 per cent recovery in 2021, 88 per cent in 2022 and 105 per cent in 2023. “We at Emirates have taken a more optimistic view by increasing capacity to 40 per cent already. We want to enhance this to 70 per cent by the end of the year. People are desperately waiting to travel and when any place opens up, we see a spike in bookings. There were 3.6 million searches on www.emirates.com for places to travel in July alone.”

Kazim said another noticeable trend during recent months pertains to the lead time for bookings. “People tend to book with short lead times – 18-19 days – now, not six-12 months as was being done earlier,” he said, adding that this was because of the pandemic and the fluid situation arising out of it.

He said in addition, demand for business and first class travel has increased as people want more privacy while flying now, compared to the pre-COVID era.

Where are people travelling to?

He said as people look for places to travel, there has been a movement towards the islands – Maldives, Phuket, Seychelles, Mauritius, Greece etc, even as demand is shaping up for countries in Europe like Switzerland, France, Spain, Russia and Italy. With summer holidays here, people are also visiting families in home countries like India and Pakistan, Morocco, Cairo and Amman in a trend that has “never stopped”. Other areas where there has been strong demand include the marine/cruise business, diplomatic travel and the SME and corporate sectors.

In terms of travellers from the US, he said the airline has seen a spike in bookings from tourists and investors, with the passenger seat factor crossing 65 per cent, way above the levels achieved elsewhere. “In July-August, around 20,000 visitors arrived in Dubai from the US while 14,000 travelled from here to the US. When EXPO 2020 commences, the number of visitors will increase,” he said, noting that Emirates expects around 30,000 visitors per month during the event.

On the much-anticipated resumption of India-UAE flights, Kazim said he could not put a date to it. “This is being dealt with at the level of the governments. For sure, there is an eagerness to open up not only to India but also other places. But when and how this will happen, we do not have a timeline yet.”

The airline’s CCO said Emirates has refunded Dh8.5 billion worth of tickets to passengers whose bookings were adversely impacted by the pandemic. The refunds were made within a very short period of time. In fact, over Dh5 billion of the refunds was cleared by September last year itself, with over 1.4 million refund requests being catered to since the impact of COVID-19 began to be felt in March 2020.

In fact, more than 600 tonnes of COVID-19 vaccines have been transported on Emirates aircraft, the equivalent of 150 million doses, so far. Six different vaccines have been flown to over 80 destinations across six continents with Emirates SkyCargo becoming a global leader in the air transportation of temperature-sensitive pharmaceuticals. The carrier has dedicated GDP certified infrastructure at its Dubai hub for handling medicines. At the peak of the pandemic, the carrier flew nearly 200 tonnes of pharmaceuticals every day on its flights.

Going forward, Kazim said, “As an airline, we will keep growing, recover capacity, enhance co-operation with Flydubai and bring back the Emirates brand to what it was pre-pandemic times. We will continue to enhance our offerings with new products and innovations like the introduction of premium economy.”

The new Premium Economy cabin, which already features on Emirates’ new A380s, has wider leather seats, allowing extra room to stretch out on raised cushioned leg rests. Use the six-way adjustable headrest, the seatsallow passengers to relax into a greater recline.

Of the 124 destinations where services have resumed, 30 A380s have been deployed to 15 cities with 129 weekly flights, he added.