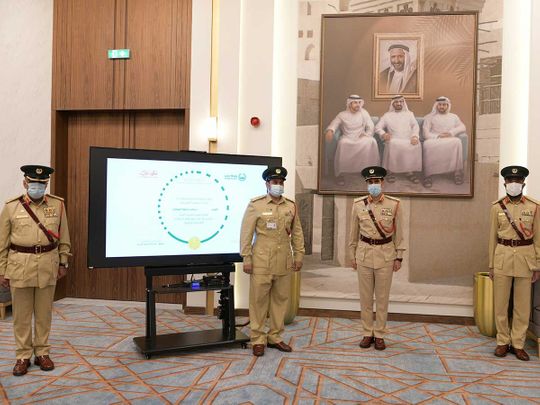 Dubai: Two Dubai Police officers were honoured for their swift response in arresting within an hour an attempted murder suspect.

Capt Saeed Al Hanawi and Lt Saif Al Khatri from Al Qusais Police Station were awarded by Lieutenant General Abdullah Khalifa Al Marri, Commander-in-Chief of Dubai Police, for handling the report and arresting the suspect after he had fled the crime scene. “Their action reaffirmed Dubai Police’s keenness on responding rapidly to emergencies and criminal reports as well as capturing perpetrators and bringing them to justice,” said a statement from Dubai Police.

According to Al Qusais Police Station deputy director Colonel Saeed Al Madhani, the Command and Control Centre at the Dubai Police General Command received a report about an “attempted murder” incident at a staff residence in Muhaisnah 2, Dubai.

Al Madhani said: “The two officers rushed to the scene and gathered information from residents and other witnesses in the area. They came to conclusion that the perpetrator is an Asian national, and that he had held his co-worker in one of the rooms before stabbing him in the neck with a sharp knife.

After stabbing his co-worker multiple times over a dispute, the perpetrator left the room carrying the murder weapon. He then threw it on the ground and fled the crime scene. The dedicated officers immediately swept the surroundings, and apprehended the suspect who was covered in blood.

Al Madhani urged the public “to use reason and logic in dealing with disputes and to resort to the police in the event they are exposed to harm or abuse, and to refrain from taking matters into their hands as this leads to dire consequences for all parties.”