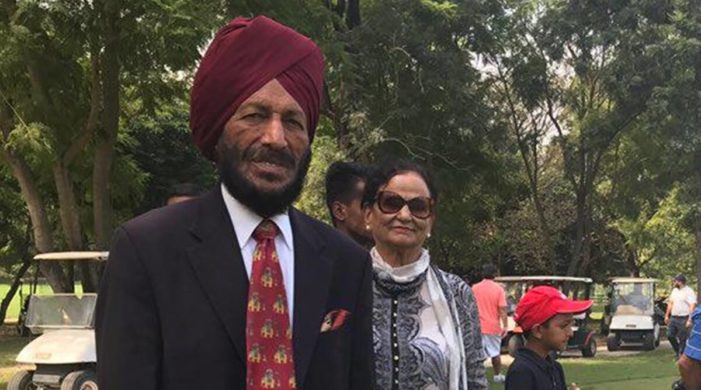 Legendary Indian sprinter Milkha Singh, who is battling Covid-19 in the ICU of PGIMER, is stable and his condition is “better than yesterday”, the hospital authorities said on Saturday. Singh’s wife Nirmal Kaur, who is in ICU of a Mohali hospital, is stable according to the hospital’s medical bulletin update.

“Flying Sikh Shri Milkha Singh ji, being unwell due to COVID-19, has been admitted in the ICU of NHE Block of PGIMER since June 3. On the basis of all the medical parameters today, that is June 5, his condition has been observed better than yesterday,” Prof Ashok Kumar, official spokesperson of PGIMER, said in a statement, quashing rumours about his death doing rounds in the social media since Saturday morning. Later, Dr Jagat Ram, director PGIMER, too issued a video message confirming the same about Singh’s health.

Singh, who was admitted to the Covid ward of Nehru Extension Hospital at PGIMER on Thursday afternoon, is still on oxygen support and the Milkha family too issued a statement on Saturday afternoon regarding the couple’s health. “Milkha ji is stable and doing well but still on oxygen. Mrs Nirmal Milkha Singh ji continues to battle it out valiantly. Please ignore the rumours floating around. It’s false news. Thanks so much for your continued prayers and wishes,” the family said in the statement.

Milkha Singh sir’s condition is stable and on oxygen in ICU of PGIMER, according to his son Jeev Milkha Singh. @IndianExpress @IExpressSports @iepunjab

Later in the day, Punjab CM Capt Amarinder Singh spoke with Jeev Milkha Singh to get update about the health condition of his parents and posted a video on his talk with Jeev. “Spoke to Jeev Milkha Singh son of ‘Flying Sikh’ & national icon Milkha Singh ji to enquire about the condition of his father who is admitted in ICU due to Covid 19,” tweeted Amarinder. In the video, Capt Amarinder Singh offered his government’s full support to the family and asked whether the family needs any help with Jeev sharing about the health of his parents and saying that the whole family and fans are praying for their good health. On being asked why Milkha Singh had to readmitted in ICU of PGIMER days after the legend was discharged from the Mohali hospital, Jeev said, “He was having a tough time in breathing and suffered some suffocation. After he requested to take him to PGIMER, we moved him there,”. Singh had contracted the Covid-19 virus on May 20 last month after one of their cooks tested positive and was admitted to Mohali hospital four days later before getting discharged last week.

Later in the evening, the Mohali hospital stated in their update about Mrs Nirmal Milkha Singh, who had been admitted in the hospital due to Covid pneumonia last week, that she is stable and the family has requested for privacy. On Friday, the Mohali hospital had stated that Mrs Milkha Singh’s health has deteriorated with progression disease and is increase in oxygen level and is presently on HFNC and NIV intermittently. “Mrs Milkha Singh continues to be stable. The family has been inundated with rumours and negative posts. They have requested for privacy and will give further updates as and when there is a change in condition of either of their parents,” the hospital stated.

Please don’t run false news and create rumors about the legendary athlete and pride of India Milkha Singh Ji. He is stable and let’s pray for his fast recovery🙏