Can a yarn store be a place of healing? 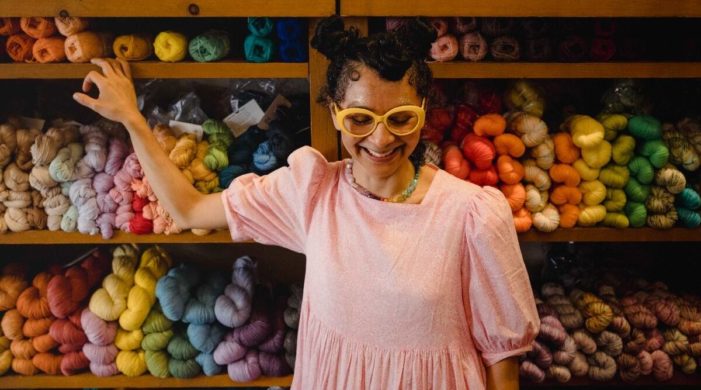 Unlike so many small businesses, Downtown Yarns, Leti Ruiz’s yarn store in New York’s East Village, managed to make it through the pandemic intact. A surge in interest in crafting — including knitting and crocheting, the store’s specialities — brought both returning and new customers in search of comfort and distraction. When people were stuck at home, patrons placed orders over the phone or through Instagram, and a friend of the store made deliveries to all five boroughs. In the end, the store actually fared better financially in 2020, Ruiz said, than it had in 2019.

Now, however, Ruiz is facing a new landscape: the unknown world of post-pandemic crafting. “It’s sort of slowed down because people are going back to work or they’re travelling,” she said. “So I feel like now it’s more like regular times.”

For many, crafting emerged during the pandemic as an essential way to reduce anxiety and turn feelings of ambient restlessness into something soothing and productive. Andrea Deal, co-owner of Gotham Quilts in midtown Manhattan, described a frenzy at the beginning of the pandemic in which her store’s normal sales of sewing machines tripled. The swell wasn’t just about keeping idle hands occupied, she said. It’s a reflection of how people were rethinking their lives during isolation. “We’re seeing low-wage workers not wanting to go back to their jobs. They realize, ‘I’m more important than this, and I want to be doing something more worthwhile,’” Deal said. “Being able to create something yourself and be creative and produce something useful, either for yourself or for someone else, I think there’s a huge amount of satisfaction in that.”

‘When you’re sort of frightened of going out, you knit more.’

As stress and uncertainty about the future start to diminish, however, even just a little — due largely to the availability of vaccines and the lifting of pandemic restrictions — it’s unclear what role crafting will continue to play in the lives of those who adopted it as a stress relief measure during an extraordinarily trying year.

Rita Bobry, who was the owner of Downtown Yarns for 17 years before she retired and passed the store to Ruiz, remembers well a similar moment of post-traumatic crafting in the city. In 2001, when her shop had just opened, she welcomed anxious New Yorkers who were turning to knitting as a way to self-soothe following the attacks on Sept. 11. On that day, the air outside the yarn store was thick with dust, but Bobry decided that the store would remain open. Lighting candles to put in the window, she opened her door to passersby.

“I think people were staying home more. They were wanting to be in groups, in communities. A lot of people lost their jobs, too,” Bobry said. “When you’re not working, you knit more. When you’re sort of frightened of going out, you knit more.”

The yarn store became a sort of gathering place. “People who were feeling lost just walked in,” Bobry said.

‘I don’t know about you, but my life’s gotten a little more complicated since things have opened up.’

Craft stores couldn’t serve as physical gathering places during much of the pandemic. Fledgling crafters in search of comfort turned to the digital options that stores offered online. Purl Soho, a yarn store that opened shortly after Sept 11, has seen traffic to its website spike during the pandemic as customers sought out the store’s online repository of tutorials and free patterns.

But the online experience can’t replicate the tactile pleasures of hands-on crafting or of learning in person from fellow crafters. Purl Soho emphasizes natural fibres, colours and textures in the materials they sell, a perspective informed by the store’s co-owner Joelle Hoverson’s background in fine arts. Crafting is a way to enjoy such materials — and connect to a shared past.

Jennifer Way, an art historian and professor at the University of North Texas, has studied the use of crafting during times of crisis. She’s found that the crafts themselves — the quilts, the scarves, the needlepoint pillows — tend to matter less than the soothing fabrication process that creates them. Crafting has a “haptic quality,” she explained, which, through touching and working with craft materials, connects to ideas of mindfulness and wellness.

“Craft seems, in some ways, with its repetitive gestures and sometimes repeated projects, to offer that opportunity for remaking a mind-body connection,” Way said. “The craft practice itself offers an opportunity to connect mind and body to address healing, stress, all those kinds of things.”

Quilt Emporium in Los Angeles has been hosting a Zoom quilting class during the past year with more than 60 participants. Lisa Hanson, the store’s owner, said many of her pandemic customers are interested in in-person quilting — although not all, which she believes is a natural consequence of restrictions being lifted. Crafting, after all, is something people generally do in their spare time, which many had an unusually ample amount of over the past year. Those days may be over. 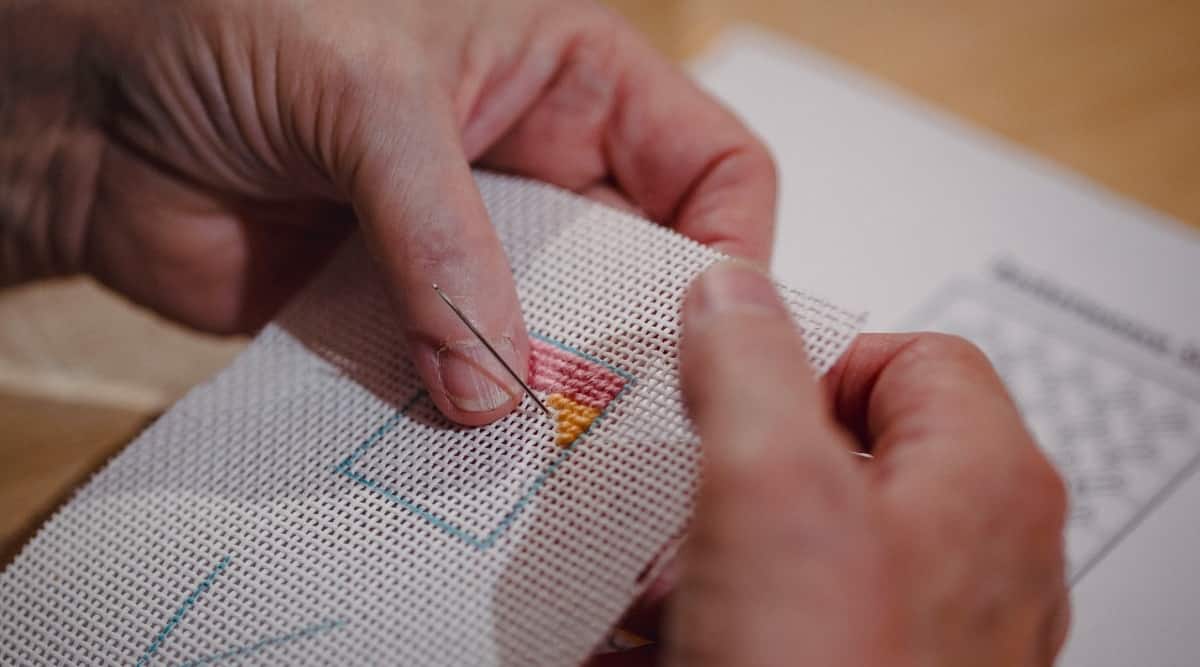 Classes are being taken for quilting and knitting. (Photo: New York Times)

“I don’t know about you, but my life’s gotten a little more complicated since things have opened up more,” Hanson said.

A survey conducted by Premier Needle Arts, a holding company that operates several crafting brands in the quilting space, found that the number of new quilters increased by 12% in 2020 and that 51% of existing quilters were spending more time quilting than in previous years. Hanson is keeping her faith in the recent converts. “So far, a lot of people are keeping some dedication for their newfound craft,” she said.

Annie & Company Needlepoint and Knitting on Manhattan’s Upper East Side recently held its first in-person classes since the beginning of the pandemic. For their Saturday afternoon Beginner Needlepoint class, four out of eight slots were filled.

“You’re either into it, or you’re not,” said Annie Goodman, the store’s owner, “and those that do get into it can find it very relaxing and meditative. And I think they’re sticking with it.” 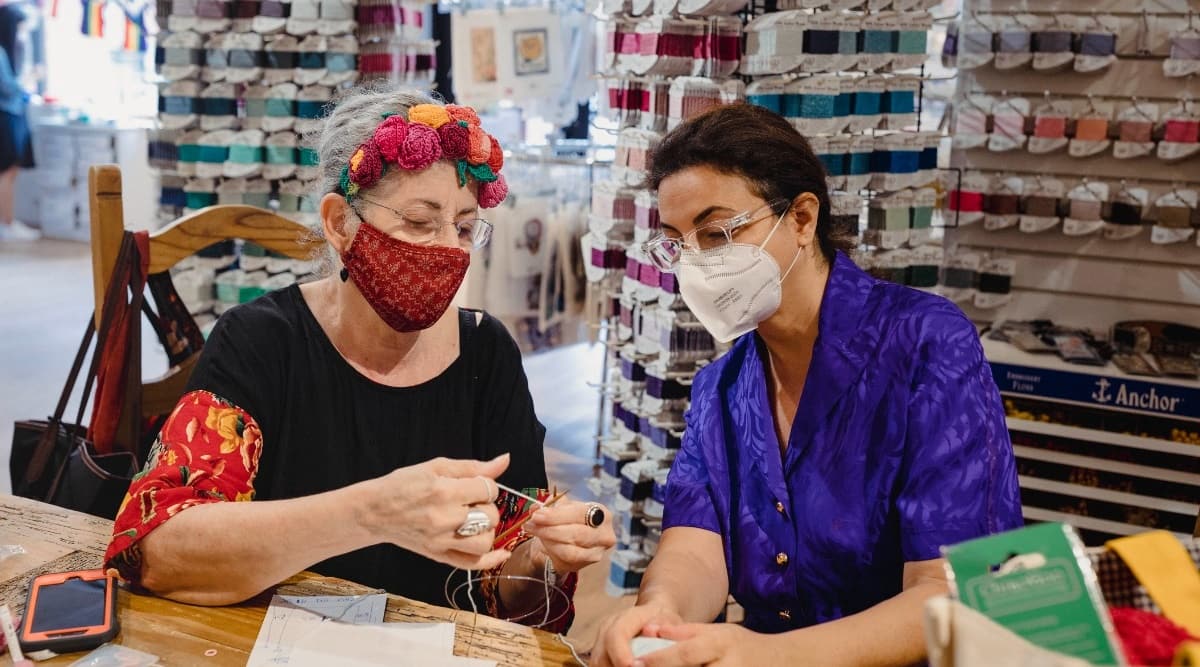 Those who attended the Saturday class represented an intergenerational group of new crafters who sat huddled around a circular table while wearing masks, swapping television recommendations as they learned the continental and basketweave stitches.

I watched as the group’s facilitator helped an attendee fix a mistake in a neat row of green thread. Observing the closeness of the interaction — the two of them head-to-head over the same mass of yarn and canvas, hands almost touching, trying to determine what went wrong — it seemed impossible to me that you could ever learn how to craft in any other way.

Ruiz of Downtown Yarns has faith that the online crafters will turn up in person, just as her regular customers returned when she first reopened her store last year. “It started with people in the neighbourhood just stopping in at the door and I was showing them yarns,” she said. “It felt like, oh, wow, we’re a little village. We’re a community. And it’s all OK.”

This article originally appeared in The New York Times.