Today, the U.S. Patent and Trademark Office officially published a granted patent from Apple that relates to an advanced security product table in the hopes of thwarting quick and easy grab and run robberies at Apple Stores. Such robberies are out of control in California due to poor laws being supported by radical politics.

In the summer of 2018 Patently Apple posted a report titled “Apple has to rethink their Open Apple Store Design as another Robbery in California occurred in Front of Customers.” The report covered a robbery in progress video that from the perspective of a mall surveillance camera.

Since that time there have been countless Grab and Run Robberies at Apple Stores, especially in California where thieves can steal up to US$999 without worrying about being held responsible in court.

Today the US Patent & Trademark Office published a granted patent from Apple simply titled “Product-Display System.” Apple notes that “In some cases, a retailer may further desire to limit the potential purchaser’s ability to remove products from a display area.”

Apple’s granted patent elates to new product-display systems which may be used, for example, to display products to customers while limiting the customer’s ability to remove the displayed product from a display area.

For example, the product-display system may allow a customer to easily lift, rotate, and manipulate a displayed product in a smooth, fluid, and user-friendly manner, such that the security features do not detract from a customer’s experience when viewing, handling, and testing the displayed product.

Apple’s patent FIG. 11 below illustrates an iPad Pro with its associated Magic Keyboard attached with the new security system: FIG. 13 presents a side view of the iPad Pro attached with a retainer bracket. 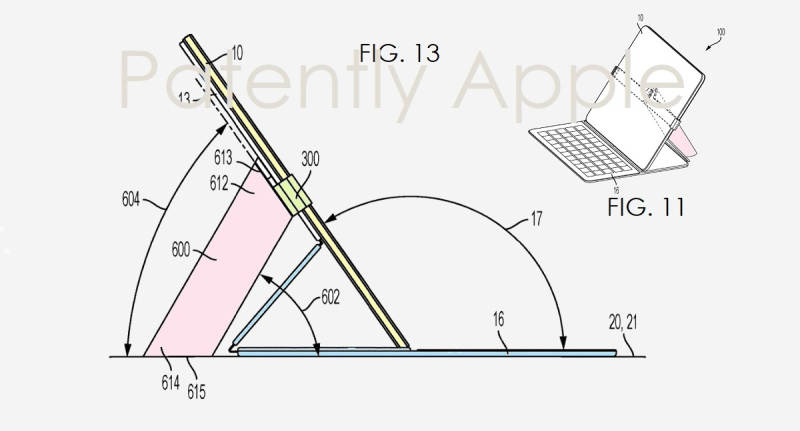 Further, in some embodiments, the products themselves may also monitor the presence of the alarm module (e.g., via a data and/or power connection), and an alarm may be triggered (e.g., an audible alarm on the product) if it is detected that a product has been disconnected from the display area.

The cabling system will allow users to pick up a unit to a comfortable level for most products unlike some retail stores that will only allow a tablet to be raised inches off the table. The cabling system is design to allow maximum freedom while securely ensuring that the product can’t be removed from the table without trigger an alarm.

Should Apple actually follow though on this product table security system in the future, it should easily stop the quick grab and run robberies that their stores have undergone over the past few years. Even Apple fans get rattled when thugs go into attack mode and it’s negative PR all around that Apple could live without.