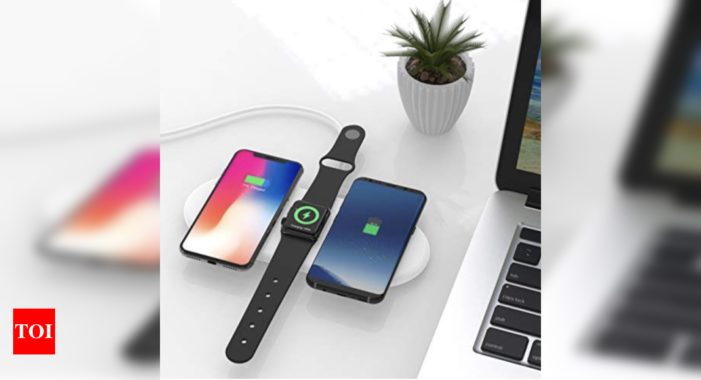 Rarely a product launch becomes a ‘mysterious saga’ but that’s exactly what seems to be happening with the Apple AirPower mat. The AirPower mat was or is (?) supposed to be a wireless charging device capable of charging the iPhone, Apple Watch and AirPods together. Apple officially shelved the product but rumour has it that it may be revived.
According to a report by Bloomberg, “Apple is still exploring a future wireless charger that works similarly to its failed AirPower, a charging mat designed to simultaneously power up an iPhone, Apple Watch and AirPods.”
Not just that the report further states that Apple is “investigating” other wireless charging methods as well. These methods can work over “greater distances than an inductive connection,” states the report.
For those who are unaware, the AirPower mat first made an appearance in 2017 during the launch of the iPhone X. Apple in its keynote showcased the device but never really talked about it. Rumours went back and forth over the launch of AirPower mat for almost two years.
However, in 2019, Apple officially announced that it is killing the product. Dan Riccio, Apple’s SVP of hardware engineering, said in March 2019 that, “We’ve concluded AirPower will not achieve our high standards and we have canceled the project.”
Last year, prolific Apple tipster Jon Prosser suggested that Apple may be working on reviving the product. But in October 2020, Prosser made a claim that the product was ‘dead’ again. “All AirPower prototyping / testing has been removed from the schedule for 2021. Sources doubt that it’ll ever be picked back up again. Seems like once again, AirPower is dead,” Prosser had noted.
The latest Bloomberg report adds another chapter to the AirPower mat saga. The report states that the timeline of the launch of AirPower or a similar product is not known and could be “several years” away.