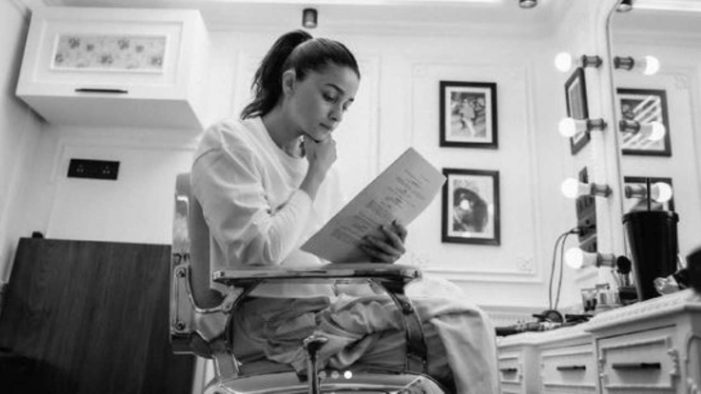 After lockdown restrictions were eased in Maharashtra, the Hindi film and television industry resumed shooting in the maximum city. Several actors were happy and relieved to be back on sets and among the many was Bollywood diva Alia Bhatt who recently shared a post-pack-up shot from an ad shoot, expressing how she missed being on the sets.

On Saturday, Alia Bhatt took to her Instagram had to share a carousel of photos from her first day on the sets of her upcoming film ‘Darlings’ which she is c0-producing with superstar Shah Rukh Khan.

In the black-and-white photos from her vanity van, Alia is seen prepping for the shoot while holding a piece of paper in her, apparently going through her dialogues before giving a shot. She seemed totally engrossed and geared up for the first day on the ‘Darlings’ set.

In the caption, Alia wrote, “day one of DARLINGS! my first film as a producer but I will always be an actor first & forever (in this case a very nervous actor) I don’t know what it is .. a night before I start a new film I get this nervous tingling energy all over my body.. i dream all night about messing up my lines..become jumpy.. reach set 15 mins before time fearing I’ll be late! I guess this feeling will never go away.. and it shouldn’t – because being nervous.. and feeling unsure means you really really care P.S – wish me luck pls (I’ll need all of it to match up to my co-actors @itsvijayvarma @shefalishahofficial @roshan.matthew).”

Soon after Alia shared the post, actor Vijay Verma wrote in the comments section, “Same! Sleepless and on tenterhooks. But I got the best coactor/producer so I’m sorted. aap apna dekho darlings (sic).”

‘Darlings’ marks a first for many — the directorial debut of Jasmeet K Reen with a feature film and Alia Bhatt’s first as she turns producer with Eternal Sunshine Productions.

In a statement, Alia had earlier talked about starring in a film she was co-prouding. She had said, “I am really excited to be part of Darlings; it’s a powerful story with a lot of humour and doses of dark comedy. I am thrilled to have Darlings as my first film as a producer, that too in collaboration with my favourite, Shah Rukh Khan and Red Chillies.”